What Will It Take to Boost Vaccinations? The Scene From Kentucky’s Back Roads 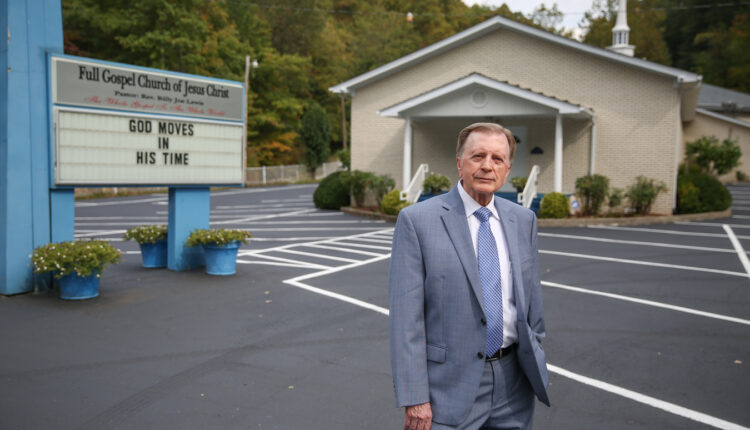 SMILAX, Ky. — In the end it was the delta variant that drove Rose Mitchell, 89, down the winding mountain road to the Full Gospel Church of Jesus Christ to get the shot. Her pastor, Billy Joe Lewis, had told his congregation that, No, ma’am, a covid vaccine would not leave the “mark of the beast” nor rewrite their genetic codes.

Mitchell, who has known the deaths of eight of her 13 children over the years, was done taking chances with the virus stealing up the hollers along Cutshin Creek.

“That stuff’s getting so bad, I was afraid to not take it,” she said, sitting in her daughter’s car in the church parking lot. “I said, ‘Well, if all the rest of them are going to take it, I’ll take it too.’”

Kentucky is in the midst of a covid-19 wildfire sparing no part of the state; new case counts topped 4,000 a day for much of September, before easing somewhat this month. Hospital intensive care units are still at capacity in some regions, with covid patients occupying half the beds. Gov. Andy Beshear has called the situation “dire.”

Across the nation, older people have been steadfast takers of the covid vaccines: About 95% of people 65 and older have received at least one shot. But geographic variations cloud that math. Older Kentuckians in rural hamlets far from Louisville and Lexington are trailing in vaccination, with rates as low as 55% in Wayne County, on the Tennessee state line.

In Leslie County, in the foothills of the rugged Pine Mountain ridge that anchors the state’s eastern coalfields, gravel roads wind through thick forests blanketed with kudzu vines. House by house, church by church, public health workers are trying to outsmart the fantastical tales about the covid vaccines spread on Facebook and overcome the everyday hurdles of financial hardship and isolation.

“Some of our older people don’t have access to vehicles because their family works,” said Maxine Shepherd, a regional health coordinator for Leslie County and four-decade-long member of Full Gospel Church. Even for those with a car, gas is expensive, she said, and trips from secluded hollers to town are rationed out carefully.

Covid-19 is surging in Kentucky — and it hasn’t spared the Full Gospel Church of Jesus Christ on Cutshin Creek. As members began to fall ill, Pastor Billy Joe Lewis suspended Sunday services and canceled Homecoming, a cherished yearly gathering that marks the fall foliage with a celebration of the gospel and shared faith. (Jessica Tezak for KHN)

While Kentuckians watched the devastating early months of the pandemic from afar, covid has long since made its arrival — and it hasn’t spared the church on Cutshin Creek. In recent weeks, Pastor Lewis held a funeral service for a 53-year-old unvaccinated former coal miner, suspended Sunday services after more members fell ill, and with heavy heart canceled Homecoming, a cherished yearly gathering of area churches that marks the fall foliage with a celebration of the gospel and shared faith.

Local health agencies have been eager to enroll churches in the all-hands-on-deck vaccination effort; older residents are more likely to attend religious services, and in communities like Smilax, ministers are trusted advisers.

Some church leaders have refrained, afraid of offending congregants in a state where distrust of government intrusion runs deep. But not Lewis, who helped build Full Gospel Church on a rare flat parcel of land in 1972 and has led it ever since. With a smooth pelt of silver hair and a luminous smile, Lewis spends long stretches of the day in prayer, and he says God told him to protect his flock.

When “Sister Maxine” from the regional health department suggested a drop-in vaccine clinic in the church parking lot, Lewis was all in favor. He promoted it from the pulpit and on the church’s must-read Facebook page. 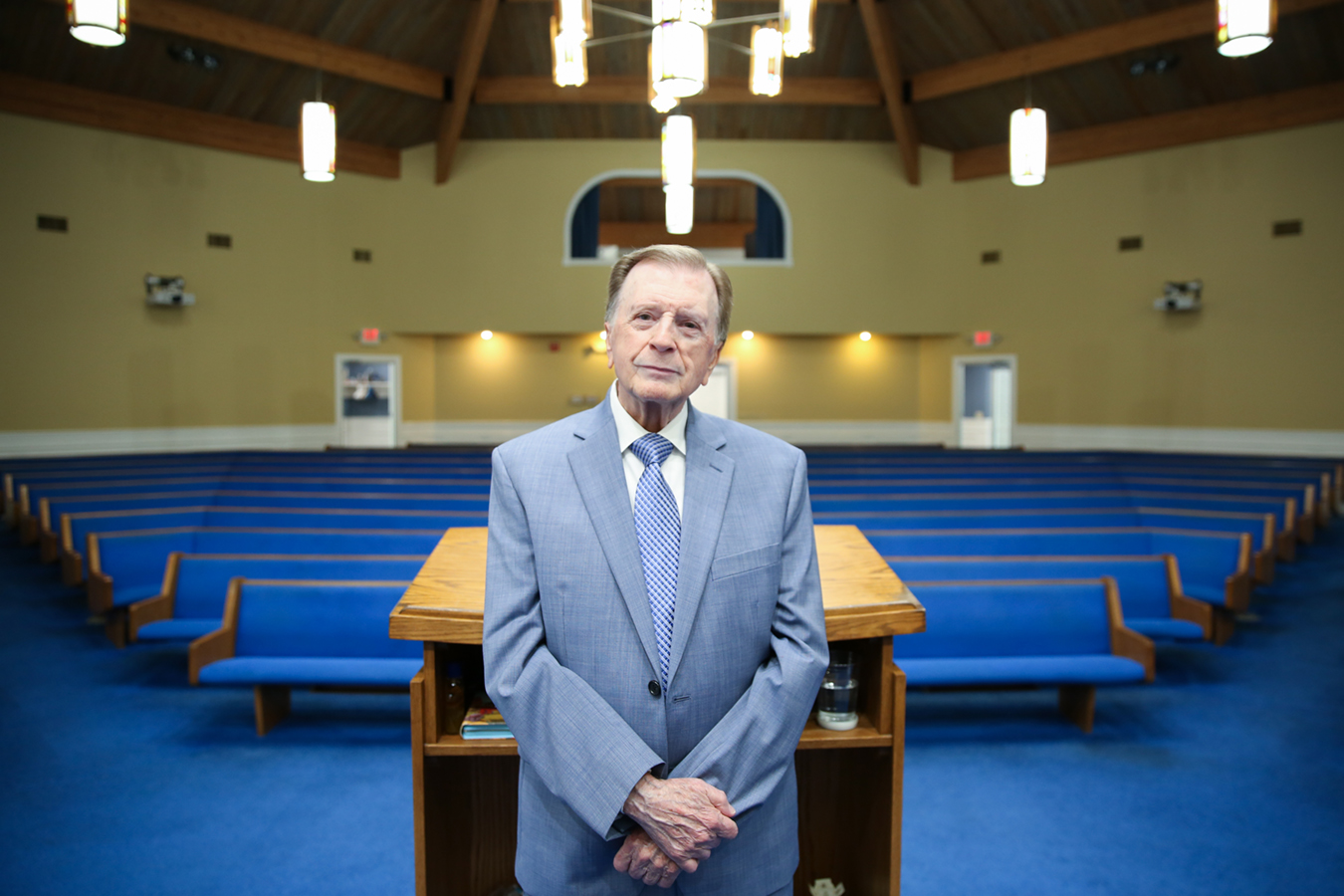 Some church leaders in Kentucky have refrained from promoting covid vaccination, afraid of offending congregants. But Pastor Billy Joe Lewis, leader of the Full Gospel Church of Jesus Christ in Smilax, says God told him to protect his flock. He promoted vaccination from the pulpit and on the church’s lively Facebook page. (Jessica Tezak for KHN)

“We’ve still got to use common sense,” he said. “Anything that can ward off suffering and death, I think, is a wonderful thing.”

Vexed by the slow uptake in vaccinations by some Americans, President Joe Biden has mandated shots for health care workers in facilities such as hospitals and nursing homes, as well as for federal workers and employees of large companies. While the exact timing and details of the private-sector mandates are still being hammered out, the specter of coercion outrages many Kentuckians, particularly in Appalachia, where government directives have been met with derision.

“We do not like to be shoved,” said David McKenzie, who grew up in Louisa, a once-booming coal town on the West Virginia border, and now owns the local nursing home. “We resent it, and we shove back.”

Opposition to the vaccines in Lawrence County, where the vaccination rate is 39%, is not overtly political so much as willful. “They’re fearful of ‘the Man,’” McKenzie said. “The Man could be your employer, it could be the government, it could be a newspaper reporter.” People who boasted about refusing the vaccines cannot change their minds, or “they’ll look like they’re weak, or they caved to the Man.”

In nearby Salyersville, the virulence of the delta variant has shaken some holdouts. Santana Salyers, 22, braved torrential rain to get her shot at the county health department, a one-story building on a stretch of freshly paved road. In her third trimester of pregnancy, she feared the hospital would not let her hold her newborn if she wasn’t vaccinated. Salyers works at the IGA grocery store and says to vax or not to vax comes up there almost every day. “I’m a fence-straddler,” she said. But around town, “you’re either against it or for it.”

Turnout for the Salyersville health fair was muted by the remnants of a tropical storm, but a few dozen people still showed up to get their shots. In the waiting room, vaccine takers received $25 Walmart cards and a chance to win a Fitbit or Instant Pot. The prizes were a big draw.

James Shepherd, who is both the town’s mayor and director of the Magoffin County Health Department, bemoans the county’s 44% vaccination rate: “In a small community like this, they make up their mind ‘yes’ or ‘no,’ and that’s it.” What will it take to boost vaccinations? “A miracle,” he said with an exasperated laugh.

Shepherd’s close friend Carter Conley, the beloved captain of the county rescue squad, died last month of covid, despite being vaccinated. Conley’s death has been deeply felt around town, but also has given fuel to those who see vaccination as pointless.

Doubts about the vaccines’ effectiveness extend to nursing homes in Kentucky despite the persistent correlations between nursing home outbreaks and low vaccination rates among staff.

On a mid-September weekday in Danville, a small city southwest of Lexington, residents at the Landmark of Danville Rehabilitation and Nursing Center sat on a quaint covered porch playing a game of 20 questions with the activities staff. Although 80% of the residents in the facility were fully vaccinated as of September, according to the Centers for Medicare & Medicaid, that was true for just 28% of health care personnel, who dash out and back at lunchtime ferrying takeout fast food.

The unprotected workforce does not faze one man who is moving his elderly father into Landmark. The man, who works as a registered nurse at the local hospital, and a family friend accompanying him did not want to give their names, but they doubt the vaccines’ efficacy.

The man’s parents were vaccinated in March but fell ill with covid in August, he said. His mother was put on a ventilator and died; his father was still in the hospital recovering and would soon be moved to the nursing home.

The facility’s low staff vaccination rate is “not necessarily pertinent,” he said, since his father would be receiving “end-of-life care.” His companion said she personally knew four people who died of covid and that two had been vaccinated and two had not. These cases, she said, “don’t get reported because they don’t fit the narrative.”

Standing on the porch amid festive fall decorations, Landmark’s administrator, Cindy Hollins, declined to discuss what might account for her staff’s low uptake and politely asked a reporter to leave.

In Louisa, three hours east of Danville, David McKenzie believes the high rates of vaccination among residents and staff at his Jordan Center will be a selling point. “I advertise I’m the safest nursing home in the state of Kentucky to live and work in,” he said.

McKenzie and his sister lived in the nursing home as kids; their parents opened the home and couldn’t find another house to rent when the town was overflowing with coal miners. He learned to play piano from a resident, down a few fingers from diabetes, who had once played in Duke Ellington’s band.

Last winter, covid ravaged the nursing home for months, infecting nearly every resident. An employee’s 33-year-old daughter, who didn’t want the vaccine, was buried in early September; then a former employee, who had quit to work at a hospital that didn’t require vaccination, died.

As soon as vaccines became available, McKenzie and his staff went room to room, explaining the science to residents. Only one family refused. Then he gathered the staff, many shaken by the loss of residents who were family members and friends.

Now, nearly every resident of the Jordan Center is vaccinated with three shots, and the staff vaccination rate hovers at 85%. But the holdouts keep McKenzie on edge.

“I sat over here on this front porch until 2 o’clock in the morning talking to two of the nurses that don’t want to vaccinate,” McKenzie said. “One has been here for 37 years and the other for 15 years. They’re dug in. They’re adamant.”

Testing staff members who refuse to get vaccinated falls to Misty Robertson, a registered nurse who has worked at the facility for decades. She views every interaction as a chance to educate her co-workers about why they should get the shot. “I’m not mean about it,” she said. “I say, ‘I really don’t want you to be on a vent and die.’”

Robertson’s father, who lived at the Jordan Center, died of covid in January. Her entire family is vaccinated, including her three children and her husband, who works at Walmart. Everyone except her twin sister, a receptionist for a local pediatrician. She tells Robertson covid is fake and “it’s all because of Biden.”

“I get mad,” said Robertson. She vehemently disputes the conspiracy theories circulating through the town’s social networks, but, she said with a sour laugh, that she sometimes goes too far. “I was put in Facebook jail.”

McKenzie’s public stance has made him a pariah in some quarters, too. A customer attacked him at Walmart and threatened to wait for him in the parking lot. The darkened mood has carved the town into opposing camps, and he thinks Biden’s vaccine mandates will just stiffen that divide.

Certainly, they are proving too much for some of his nursing home staffers. Many of the unvaccinated workers at the Jordan Center are on the same shift, and McKenzie fears he may lose his entire night crew.

“They told me Sunday night they were going to leave health care and work at Tractor Supply,” he said, “where they can make more money per hour.”

Watch: Going Beyond the Script of ‘Dopesick’ and America’s Real-Life Opioid Crisis