Vaccine Promoters Struggle to Get People Boosted in California’s Fields 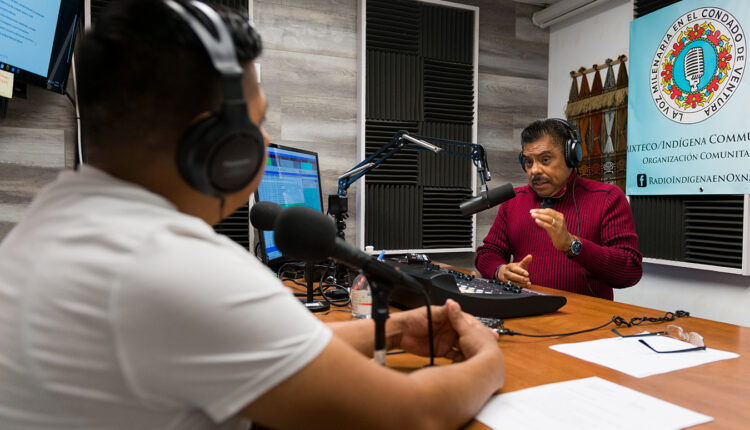 Since the start of the pandemic, Luz Gallegos and her team of 56 advocates for immigrants have battled the scorching sun, illiteracy and deadly propaganda in the fields and fruit groves of the Coachella Valley.

As they fanned out to educate farmworkers on how to protect themselves from covid-19, they quickly learned that rumors and disinformation often account for most of the news farmworkers in the area are getting about the disease. The need for boosters and the looming threat of the omicron variant have made covid communication extra challenging.

“Now, we’re debunking the myths with the boosters. It’s like a never-ending story,” said Gallegos, executive director of the TODEC (Training Occupational Development Educating Communities) Legal Center, based in Coachella.

Gallegos and her team huddle in the mornings to discuss a strategy on how to diffuse misinformation before it spreads. “Once we start hearing rumors, we try to get ahead of them and create messaging to debunk it before they start penetrating the fields like they did when we first started vaccinating in January.”

In January, the word in the fields was that covid vaccination would make you sterile. Now, people hear from friends and social media that the vaccines can turn you into a monkey, change your gender or clone you.

Gallegos and Riverside County health workers managed earlier in the year to get vaccines into the arms of most farmworkers in the valley, where dates, citrus and grapes are the dominant crops. That has eased the sales job for some of her crew of TODEC employees and volunteers.

But equity issues that were evident in the first round of vaccines are more evident now, including access to health care, language barriers and misinformation, Gallegos said. Some workers don’t understand why they need a follow-up shot. Others are newcomer migrants who haven’t been vaccinated against covid at all.

Community health organizations have struggled to provide booster shots for the Latino community — whose members account for more than half of covid cases in California. By September, about 80% of eligible Latinos had received at least one shot, the same rate as whites. But of the 23.4 million people 65 and older who had received a booster dose by Dec. 13, only 7.8% were Latinos (who make up nearly 10% of that age group), according to the Centers for Disease Control and Prevention. Latinos of other ages were also relatively unboosted.

“Latinos don’t know who to turn to for accurate information,” said Gilberto Lopez, an assistant professor at Arizona State University who has been working on vaccine communication. “The government hasn’t been doing the best job, the big national TV channels haven’t been doing that good of a job, and community organizations are working at a hyper-local level.”

One basic problem: Credible vaccine information and the science that supports it is not readily available in Spanish or other languages, said Dr. Yelba Castellon-Lopez, an assistant clinical professor in family medicine at UCLA Health. “People are afraid to contract the virus in health care settings. Many avoided seeking care even when they were sick for fear of being put on ventilators, afraid they would never make it out of the hospital.”

Pablo Ek Oxte at his home in Los Angeles. Oxte, a plumber originally from the village of Citilcum in Yucatán, Mexico, got his booster shot after hearing a public service announcement in his native Mayan language. (Heidi de Marco / KHN)

The county has partnered with TODEC to send health care providers out to the fields and hold open vaccination and booster clinics on Fridays. This answers immigrants’ fears of going to the doctor and their concerns that side effects from the shot will cause them to miss work.

“Fridays gives them the opportunity to actually recover,” said Gallegos.

Castellon-Lopez has been conducting webinars for patients and community members to dispel myths and explain the shifting reality of the covid epidemic. “What we’re learning about covid is changing every day and that makes it difficult,” she said. “I think people appreciate having access to doctors who look like them and speak the language.”

Disinformation on Spanish AM radio, social media and messaging apps like WhatsApp is fueling continued vaccine hesitancy among Latinos, according to a recent survey conducted by Change Research and the Latino Anti-Disinformation Lab. It found that almost 4 in 10 respondents had seen information that made them think the covid vaccines were not safe or effective.

Lopez, at Arizona State University, created the Covid Health Animation Project, which makes cartoons that address covid misinformation. But he thinks health communicators need to inject some bawdiness into their scripts to get people’s attention.

“The type of comedy, the type of messaging, the wording we use, it’s G-rated,” said Lopez. He just published an animation that drops a few cuss words here and there. “That’s the way this population talks. We need to use some of the language that they use to reach out to the community that’s not getting vaccinated.”

Pablo Ek Oxte, a 52-year-old plumber from a small pueblo in Yucatán, Mexico, rolled up his sleeve for a booster shot on a recent Saturday morning after hearing about the vaccine clinic in a public service announcement produced by CIELO in his native Mayan language. The group has posted a series of vaccination cartoons in various Indigenous languages on social media sites.

“I relied on the information from CIELO,” said Oxte, who has asthma and diabetes. Although he speaks some Spanish, “I appreciate the information in my language,” he said.

In Oxnard, California, Francisco Didier Ulloa and Bernardino Almazán host a show on Radio Indígena in Spanish and Mixteco, an Indigenous Mexican language.

“A lot of our Indigenous brothers don’t speak Spanish, so it was necessary to convey the information in a way that they would listen and understand,” said Ulloa. 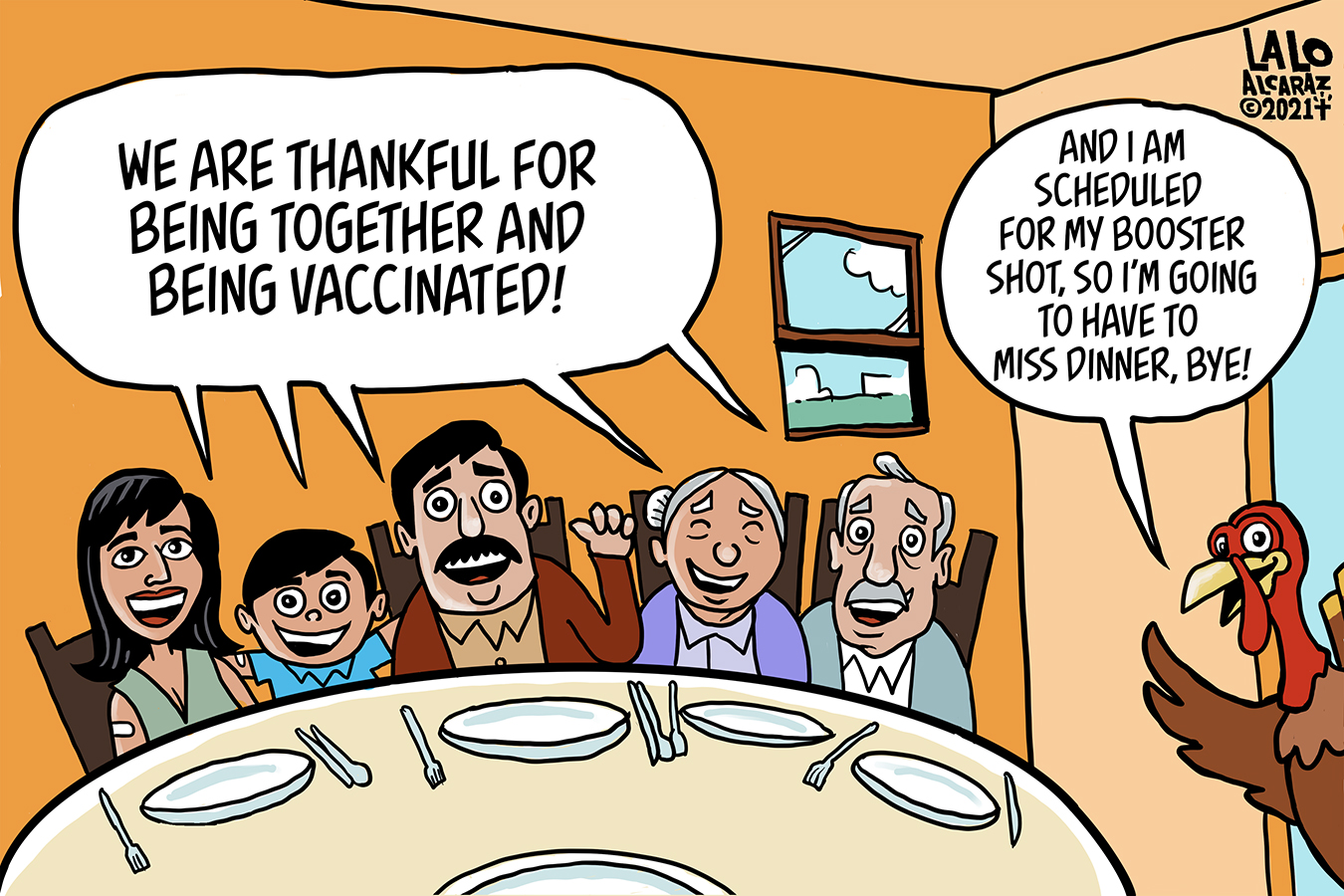 The Los Angeles County Department of Public Health has increased its social media memes and is testing strategies to narrow the vaccination gap between white and Latino residents. The state partnered with political cartoonist Lalo Alcaraz to create a series of cartoons and animations promoting vaccination and booster information.

“We want people to see themselves and their families reflected in these images and maybe do a double take and think twice about their own family’s situation,” said Alcaraz. “Maybe it changes their mind about the vaccine.”