Some Groups Are Left Out of Montana Covid Test Giveaway Program 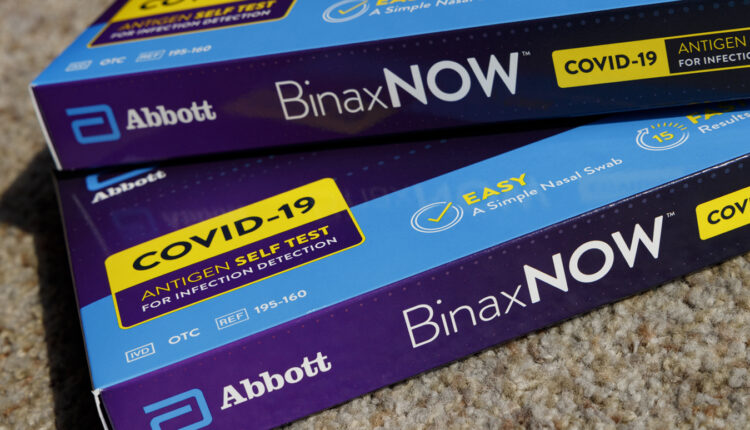 As Montana’s tally of new covid cases neared 1,000 each day in September, Shelly Stanley-Lehman worried about when the virus would reach her day care in Billings.

She wanted to have covid tests on hand to help prevent an outbreak from sweeping through her business, but stores were sold out. She spent days making calls and searching online. When Stanley-Lehman finally got her hands on a box of tests later that month, it was too late — a child’s family member, unknowingly infected, had exposed the day care to covid. The virus quickly spread to four others, including kids and staffers.

“We got the tests just in time to close down,” Stanley-Lehman said.

Rapid antigen tests for covid have emerged as a public health tool that can help keep schools and businesses open. They are less accurate than polymerase chain reaction tests, known as PCR tests, which must be sent to a laboratory for results. However, the rapid tests’ turnaround time of as little as 15 minutes can spot cases early and, through quarantines and isolation, prevent infected people from spreading the virus at schools, businesses and other workplaces. But a box containing two at-home BinaxNow tests, made by Abbott Laboratories, costs $24 at a retail pharmacy — and they are often in short supply.

The tests are much more accessible for those who are part of Montana’s state-run, free rapid test distribution program, which gives away at least two types of BinaxNow rapid antigen tests and a third non-antigen test called Abbott ID Now from the same manufacturer, Abbott. This fall, the state delivered as many as 113,000 antigen tests to hospitals, health clinics, government offices, local health departments and others.

But communication on how to access tests has been inconsistent, such as with certain detention centers and child care providers. While some jails are screening symptomatic inmates with tests from their local public health department, other law enforcement officials hadn’t heard of the availability of the state’s rapid tests at all.

Tina Bets His Medicine, assistant to the sheriff in Roosevelt County, said jail staffers there had not received rapid tests from the state or been trained on how to use them. “We’re definitely interested,” she said. “That would eliminate some problems for us. Because we certainly don’t want people sick in our jail.”

The state has communicated with schools and local health officials about the program, but it hasn’t been more broadly publicized in the past two years. Of the state’s covid-19 public service announcements, none advertise a supply of rapid BinaxNow tests or explain how to apply for shipments.

Eligibility requirements for the free tests can be complex. Some school districts are ordering recurring shipments of tests for students and staff members. But private child care centers and private employers have to obtain a federal waiver to administer certain kinds of tests. And others who are eligible either don’t know about the tests, don’t want them or are stretched too thin to add another burdensome covid task.

The result is an uneven distribution of the state’s free tests. State officials cited several reasons for that, including the federal waiver restrictions. A limited national supply chain also means officials must prioritize recipients.

But some public health officials see the gaps in test distribution as another indicator of an overwhelmed and under-resourced public health system.

Drenda Niemann, Lewis and Clark County’s public health officer, said many children and families in her county can get tested through school districts while other residents have few options when pharmacies sell out.

“It’s really hit-or-miss and we’re just doing the best with the resources that we have,” Niemann said. “There’s no consistency.”

Montana’s Department of Public Health and Human Services said it distributed nearly 550,000 BinaxNow rapid tests from October 2020 through this October. DPHHS sent 45% of those to hospitals and health clinics, according to a Montana Free Press and KHN analysis of the state’s data. An additional 13%, or about 73,000 tests, went to assisted living and long-term care facilities.

But only 5%, or 26,500 tests, went to a category titled “Other,” which includes group homes, services for people with disabilities and child care centers. That comes to slightly more than 70 tests a day for that entire category, statewide. During the same period, fewer than 2% of all tests distributed, approximately 11,000, went to dozens of state corrections facilities and jails.

Other states, comparatively, have swung open the gates to testing. Tennessee created a program for interested businesses to obtain covid test kits, free of charge, with guidelines on how to qualify. Colorado is shipping BinaxNow rapid tests directly to homes free of charge. Around the Washington, D.C., region, libraries offer them at no cost.

“In an ideal world, you would have readily available testing much like we see in countries in Europe, where families can get 10 tests a day for their home,” said Michael Osterholm, director of the Center for Infectious Disease Research and Policy at the University of Minnesota.

In ordering Abbott BinaxNow tests, Montana is careful not to stockpile more than it can deliver before the tests expire after 12 months. It sent 51,200 tests to Colorado in May that were close to their expiration date. The state doesn’t track how many tests go unused after they’ve been distributed.

Montana Gov. Greg Gianforte spokesperson Brooke Stroyke said that testing is an important component of the state’s pandemic response and that the state distributes tests to eligible vulnerable and underserved populations based on local health officials’ input.

“After all, local leaders know the needs of their communities best,” Stroyke said.

Missoula County is using rapid Abbott ID Now tests, the third kind of rapid covid test the state is distributing. The Abbott ID Now is not an antigen test but a molecular test similar to PCR tests. The state has distributed an average of 3,120 of those tests a month.

A sign tells customers at the Walgreens pharmacy in Helena, Montana, on Oct. 5, 2021, that sales of at-home covid-19 tests are being rationed. (Matt Volz / KHN)

Those tests can be more reliable, county officials said. Brian Chaszar, its covid-19 operations section chief, said his county has access to plenty of tests and is able to get the word out about what’s available.

He said some businesses and groups are bound to get missed in a large county and not every place will opt to receive tests, whether it’s because of the workload or potential backlash against covid precautions, particularly in some school districts.

“I have no envy for principals of those schools,” Chaszar said. “Some parents really want masking and testing, other parents want to have nothing to do with it and refuse to participate in it.”

With the rise of the contagious delta variant this fall, the state increased distribution of tests to public and private K-12 schools that asked for them.

“We would like as many K-12 schools to tap into these resources to help schools to stay open and be safe,” Todd Harwell, the state health department’s public health and safety administrator, wrote in a September email to local and tribal health officials.

But DPHHS spokesperson Jon Ebelt said supplying rapid tests directly to private businesses is complicated by federal regulations that require each business to receive a waiver to administer them.

Ebelt said most of the state-distributed tests are tethered by those federal rules, which he said offer “better reporting and quality control” and are less expensive.

One of the two types of antigen tests the state receives from Abbott doesn’t need a federal waiver, but it has a far more limited supply of them. Since June, the state has doled out about 18,000 of those at-home tests. Ebelt said the state’s limited stock of the less-regulated, at-home tests has been prioritized for other entities, such as local health departments.

“We were very concerned that we would not be able to secure enough tests from our supplier to expand distribution,” Ebelt said. Although some businesses such as child care providers could apply for federal waivers to access more tests, Ebelt said DPHHS did not think that was the best route because of the additional work for those “already understaffed” groups.

One former DPHHS official disagreed with the department’s interpretation of federal rules. Jim Murphy, formerly the state’s lead epidemiologist, said the state could find a way to distribute tests to day cares and other businesses if it provided proper training and oversight.

Ideally, Murphy said, the public health philosophy for navigating the pandemic should be focused on solutions rather than hurdles.

“We shouldn’t find obstacles here,” he said. “We should find ways to get these tests in the right hands.”

One workaround offered by health officials in Montana has been to connect child care centers with a federal PCR testing initiative operated through the U.S. Department of Health and Human Services, the same program Stanley-Lehman of Billings used to order tests for her child care facility. Ebelt said the department knew of nine Montana child care providers that had signed up to work with that program by early November. As of this year, Montana had nearly 1,200 licensed child care facilities.

Montanans’ access to tests varies by county, partly because of how many tests local officials request and how they are used. Joe Russell, health officer for the Flathead City-County Health Department, said that he knows people are struggling to find tests but that it’s not all on the state to advertise that tests are available.

“Sometimes it will fall to us, the county, and sometimes it’s the responsibility of the business, you know, to push forward and ask,” Russell said.