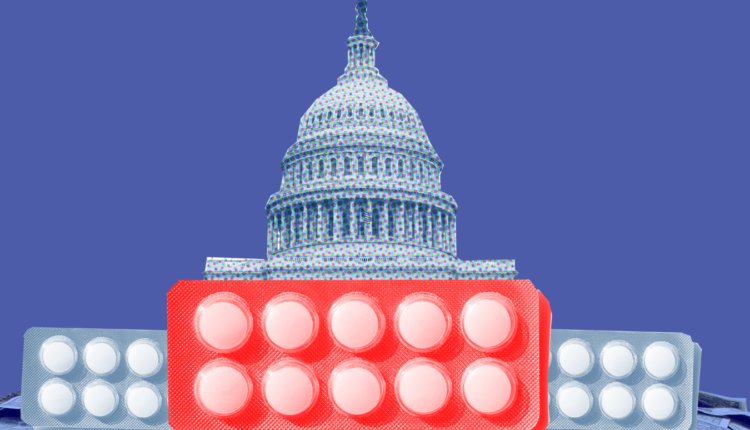 The Biden administration and Congress are embroiled in high-stakes haggling over what urgent priorities will make it into the ever-shrinking social spending bill. But for the pharmaceutical industry there is one agenda: Heading off Medicare drug price negotiation, which it considers an existential threat to its business model.

The siren call to contain rising drug costs helped catapult Democrats to power, and the idea is popular among voters regardless of their politics. Yet granting Medicare broad authority to intervene in setting prices has nonetheless divided the party.

And so, as it normally does, the drug industry gave generously to members of Congress, according to new data from KHN’s Pharma Cash to Congress database. Contributions covering the first half of this year show that some of its biggest donations were delivered with surgical-strike precision to sympathetic or moderate Democratic lawmakers the industry needs to remain in its corner.

Campaign donations to members of Congress — which must be reported to the Federal Election Commission — are the tip of the iceberg, signaling far greater activity in influence peddling that includes spending millions on lobbying activities and advertising campaigns.

Unusually, in the first half of this year Republicans and Democrats in Congress were virtually neck and neck in pulling in drug industry money, according to a KHN analysis of campaign contributions. In prior years, Republicans dominated giving from that sector, often by huge margins.

Pharmaceutical companies and their lobbying groups gave roughly $1.6 million to lawmakers during the first six months of 2021, with Republicans accepting $785,000 and Democrats $776,200, the Pharma Cash to Congress database shows. Since the 2008 cycle, the industry has generally favored Republicans. The exception was 2009-10, the last time Democrats controlled both chambers of Congress and the White House.

Democrats again narrowly hold both the House and Senate, and political scientists and other money-in-politics experts said the contributions likely reflect who is in power, which lawmakers face tougher reelection bids next year, and who has outsize sway over legislation affecting the industry’s bottom line.

Several pharmaceutical companies paused contributions to Republican lawmakers who voted against certifying the results of the 2020 election, blunting the GOP’s total fundraising haul and overall industry giving compared with other years.

“This is a really well-organized commercial sector,” Billet said. “If I’m one of these PACs, I’ve surveyed the landscape at the front end of the process, decided on our agenda and budget, and figured out who I may be able to get to and who I wouldn’t be able to get to.”

Of the top 10 recipients of funding, Republican lawmakers accounted for six; Democrats, four. Rep. Scott Peters (D-Calif.) received the most money of any member of Congress, with $63,900 in contributions in the first half of the year. Peters, whose San Diego-area district includes multiple drug companies, has consistently accepted money from drugmakers since he took office in 2013, according to KHN’s database. Right behind Peters was Rep. Cathy McMorris Rodgers (R-Wash.), who received $50,000 from the industry in the first six months of 2021. McMorris Rodgers was chosen this year to be the most senior Republican on the House Energy and Commerce Committee, which has significant influence on pharmaceutical issues. Peters sits on the same committee.

“They’re typically going to saturate the committees that are relevant to their industry,” said Nick Penniman, CEO of Issue One, a nonprofit that advocates reforming money’s influence in politics.

Next in line was Sen. Robert Menendez (D-N.J.), who accepted $49,300, the most of any senator this year despite not facing reelection until 2024. The vote of Menendez, a longtime ally of the industry, would be crucial for Democrats to pass any proposal giving the government greater control over drug prices. The pharmaceutical industry is a major employer in New Jersey, home to headquarters of behemoths like Johnson & Johnson, Merck, Novo Nordisk and Sanofi.

Menendez said he’s waiting to see the proposal, “which I expect will include language to allow Medicare to negotiate drug prices.”

“The focus of any proposal must be lowering patient costs,” he said, “and that will drive my analysis.”

Among other moderate Democrats is Sen. Kyrsten Sinema (D-Ariz.), whose vote also is critical to passage. She received $108,500 in pharma contributions in 2019-20, according to the KHN database. However, in the first half of this year, she received only $8,000. She has not said publicly where she stands on the current pricing proposal.

As Billet sees it, the pharmaceutical industry knew allowing Medicare to negotiate drug prices would likely be on the table, and drug companies shored up members, such as Peters and Menendez, who have sided with them in the past. Plus, “right now, the Democrats are driving the train, and because of that they’re going to get a few more contributions,” Billet added.

Controlling drug prices has broad support among adults regardless of political party, according to polling from KFF (KHN is an editorially independent program of KFF). But facing industry opposition, Democrats have yet to agree on a plan as lawmakers weigh which policies make it into a massive domestic spending bill to expand the social safety net and address climate change. Central to the industry’s argument is that greater government intervention in setting prices would harm new drug development; however, drug pricing experts generally say this argument is overblown. Republicans remain unanimously opposed, which means Senate Democrats can’t afford any defections to advance legislation.

Fourth in industry contributions was Sen. Catherine Cortez Masto (D-Nev.), a freshman lawmaker on the powerful Senate Finance Committee, which oversees legislation pertaining to federal health programs like Medicare. Cortez Masto received $46,000, with cash flowing in from companies like Eli Lilly, Merck, Pfizer, Johnson & Johnson and Mallinckrodt Pharmaceuticals, the latter of which filed for bankruptcy in 2020 after being swamped with litigation over its alleged role in the opioid crisis. One of her recent aides, Eben DuRoss, was hired as a lobbyist this year by the Pharmaceutical Research and Manufacturers of America, or PhRMA, federal disclosures show.

Cortez Masto is up for reelection next year in a battleground state that’s been competitive between Republicans and Democrats in recent elections. She was narrowly elected in 2016, and recent polling showed she held a small lead against her expected Republican challenger in 2022, former Nevada attorney general Adam Laxalt.

But her contributions dwarf those of other Senate Democrats in close races. For example, in the first half of this year, Sen. Maggie Hassan (D-N.H.), who also sits on the Senate Finance Committee, reported having accepted $6,000.

Sarah Bryner, research director of OpenSecrets, a nonprofit that tracks money in politics, noted several reasons Cortez Masto would pull in more money. In addition to her committee seat and competitive race, politically she’s more moderate than progressive lawmakers who have been bigger agitators against the drug industry.

“She’s not seen as an extremist, which is the kind of person who would typically take in more money” from political action committees, Bryner said.

Cortez Masto was also a recent past chair of the Democratic Senatorial Campaign Committee and therefore heavily involved in the party’s national fundraising efforts to preserve Democrats’ Senate majority. Those relationships with corporate and other donors could be leveraged for her own race, Bryner said. “Once you’ve made all the relationships, it’s not like they just disappear,” she said.

Still, the freshman Democrat has openly supported allowing Medicare to negotiate prescription drug prices, in contrast to Menendez, who voted against the idea in 2019. The Nevada senator recently told KHN that she “absolutely” backs the policy and that the pharma cash flowing into her campaign coffers doesn’t influence her decisions.

“I’ve already supported it in Finance and actually voted to pass legislation to do just that,” Cortez Masto said. “We need to reduce the health care costs for so many in this country, and that’s what I’m focused on doing, including reducing prescription drug costs.”

Peters — who unseated a Republican in 2012 — was one of four moderate House Democrats who in September voted against a plan to give Medicare broad authority to negotiate prescription drug prices. They backed a narrower alternative that includes caps on out-of-pocket spending and limits the scope of Medicare’s negotiating authority to a smaller set of medications.

That some drugmakers — including Pfizer, Johnson & Johnson, Gilead and Eli Lilly — as well as PhRMA and the Biotechnology Innovation Organization, another lobbying group for the industry, paused contributions to Republicans after the events of Jan. 6 seems at least in part to account for overall pharma contributions dropping in comparison with other years. In the first half of 2019 drugmakers gave $3.7 million, and in the first half of 2017 they gave about $4.4 million, versus 2021’s $1.6 million.

However, other drug company PACs and their industry groups kept up contributions or failed to void checks they’d issued to those who refused to certify the election results, according to a KHN analysis of the FEC data.

They include Merck, Novo Nordisk, GlaxoSmithKline, AstraZeneca, Genentech, Boehringer Ingelheim, Amgen, Teva, EMD Serono and the Association for Accessible Medicines, which all gave $1,000 or more to at least one of the 147 Republicans who voted to overturn the election results.

Direct contributions to lawmakers’ political accounts are only one way for the industry to channel cash to Congress. Companies also give money to trade associations and 501(C)(4)s, which are nonprofits that often function as “dark money” groups because they are not required to disclose their donors.

“We know that they’re giving; they didn’t stop giving. Their giving went underground,” said Carlos Holguin, research director for the Center for Political Accountability, a nonprofit that tracks money in politics.

Groups also funnel money into advertising — in September, PhRMA announced a seven-figure ad campaign opposing Democrats’ drug pricing plan — or into advocacy groups from which it may eventually trickle down to political candidates.

Another factor? Hail Mary covid-19 vaccines, developed and distributed in record time, that may have shored up goodwill with lawmakers. Or that, despite everything lawmakers have said about lowering drug costs, the industry suspects drug pricing legislation will stall once again and don’t want to spend their political capital on the issue.

“I think, frankly, drugmakers know they’ve won the match when it comes to drug pricing. This whole question of the cost of pharmaceuticals, it has come up for literally decades now and they have successfully shut it down, year after year,” Penniman said. “At a certain point, they know they have driven the nail far enough in the wood and they don’t need to do much more.”