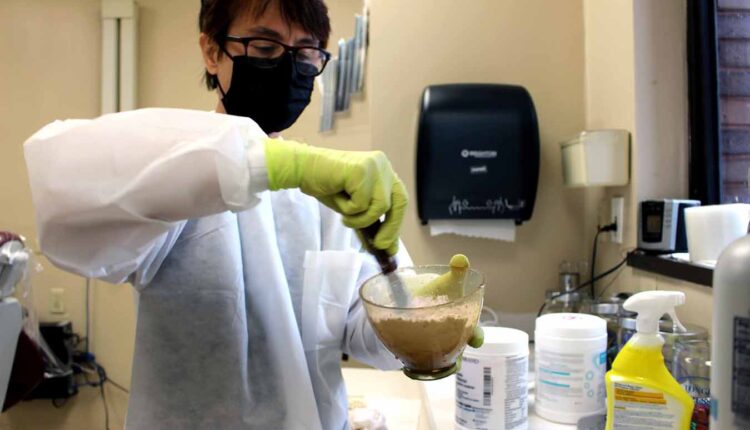 At the Access Family Care clinics in southwestern Missouri, the next available nonemergency dental appointment is next summer. Northwest Health Services, headquartered in St. Joseph, is booked through May. The wait is a little shorter at CareSTL Health in St. Louis — around six weeks.

Roughly 275,000 Missourians are newly eligible this year for Medicaid, the federal-state public health insurance program for people with low incomes, and they can be covered for dental care, too. Missouri voters approved expansion of the program in 2020, the latest of 39 states to do so as part of the Affordable Care Act, but politics delayed its implementation until Oct. 1. Adults earning up to 138% of the federal poverty level — about $17,774 per year for an individual or $24,040 for a family of two — can now get coverage.

But one big question remains: Who will treat these newly insured dental patients?

Only 27% of dentists in Missouri accept Medicaid, according to state data, one of the lowest rates in the country. Many of them work at what are known as safety-net clinics, such as Access Family Care, Northwest Health Services and CareSTL Health. Such clinics receive federal funds to serve uninsured patients on a sliding scale and was experiencing huge demand for dental services before expansion.

The reason so few Missouri dentists accept Medicaid is simple, according to Vicki Wilbers, executive director of the Missouri Dental Association: The state’s program pays dentists extremely poorly compared with private insurance or what a dentist could charge a patient paying cash. Adding to the strain, said Wilbers, dentists who do accept Medicaid often must deal with the state plus private insurers that administer Medicaid through a program known as managed care.

“You have more people on the rolls, you still don’t have reimbursement rates increase,” Wilbers said. “And it’s cumbersome.”

Still, for these new patients, the coverage can be life-changing.

Only 37% of adults in the state with incomes under $15,000 per year saw a dentist in 2018 compared with 76% of adults earning over $50,000, according to a state report. A survey by the American Dental Association found 53% of low-income Missourians have difficulty chewing, 43% avoid smiling because of the condition of their mouth and 40% experience pain.

Douglas described a patient of the clinic who believes his so-far-unsuccessful quest for higher-paying work has been hindered by the appearance of his teeth.

“We’re hoping that with the Medicaid expansion we can get him in for some care,” Douglas said. “He would like to save some of his teeth and not go to full dentures.”

About 62% of Missouri adults making under $15,000 per year have lost at least one tooth to decay or gum disease, and 42% of people 65 and older in that income range have lost all of them, according to the state report. For Missourians earning over $50,000, those rates are 34% and 8%, respectively.

Part of the dental care backlog at Access Family Care, which offers dental services at five locations around southwestern Missouri, is due to the pandemic. The clinic laid off all 95 of its dental staffers in March 2020 before gradually building back to full capacity. As with dental practices nationwide, many of their patients are now coming to get the dental work done that they delayed earlier over fears of exposure to the coronavirus.

But central to the huge demand is an overall need for more providers. Nearly 1.7 million Missourians live in a federally designated dental professional shortage area, one of the highest levels of unmet needs in the country. It’d take another 365 dentists to fill that void, at least one extra dentist for every 10 already practicing in the state.

“We could easily employ another four dentists and still have high demand,” Douglas said.

His clinic, Access Family Care, has indeed hired two new dentists to start in 2022. To manage the dental caseload until then, though, it had to temporarily stop seeing new patients.

In St. Louis, Dr. Elena Ignatova, director of dental services at CareSTL Health, had 18 patients scheduled on a recent Wednesday in November. About a quarter of them were insured through Medicaid.

Dr. Elena Ignatova prepares to make an impression of a patient’s mouth to fit dentures at CareSTL Health in St. Louis. Only 27% of Missouri dentists accept Medicaid, and many of those who do work at safety-net clinics like CareSTL Health. (Bram Sable-Smith / KHN)

By 10 a.m., she had cast a mold of one patient’s mouth to fit dentures, referred another to an oral surgeon for a root canal and prepped a fourth-year dental student for the extraction of a Medicaid patient’s remaining teeth. In Missouri, Medicaid covers simple tooth extractions for adults but not root canals or crowns.

“We remove teeth because the other treatment is too expensive and they cannot afford it,” Ignatova said. “Then it can take years for those patients to come up with the money for dentures.”

Ignatova is booked into February, but the clinic still takes walk-ins for dental emergencies. She’s also working her way through a waiting list of 39 patients who might be able to show up quickly if a cancellation or no-show opens a spot in her schedule.

There is easily enough demand for another dentist, but Ignatova said they’re still working on hiring the dental assistants and hygienists needed to reopen the school-based clinics for kids they operated before the pandemic. Those hirings are in the works, but it is slow going. As with many health care facilities, she and others said, President Joe Biden’s vaccine mandates have added an extra hurdle to recruiting and retaining staff.

One clinic that isn’t seeing a bottleneck of dental patients, though, is KC Care Health Center in Kansas City. Kristine Cody, the clinic’s vice president of oral health services, said a new patient could be seen there in about a week. The Kansas City region benefits from having the University of Missouri-Kansas City School of Dentistry, which offers reduced-cost care to patients at the clinic where its students are trained, plus several other safety-net clinics.

“I just hope people look to use it,” Cody said.

Quarantine and Tracing Rules Are All Over the Map for Students