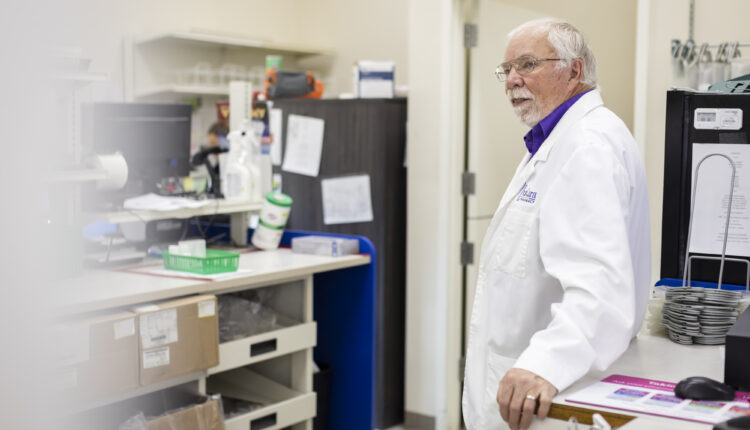 Bill Mather, a pharmacist in the small Iowa city of Greenfield, wanted to make sure his neighbors could fill their prescriptions without driving long distances or enduring long wait times.

So when pharmacy chains and big-box stores began expanding into rural markets, he sold his drugstore in 2007 to Pamida, a grocery chain owned by the Shopko department store company, hoping that would keep his practice alive. Then, in 2019, when Shopko declared bankruptcy, shuttering more than 360 stores, he and another Shopko pharmacist helped open a new drugstore for the city of about 2,000 people.

Across the country, pharmacists like Mather are filling the voids left when large drugstore chains and big-box stores with pharmacies pull out of small communities. In some areas, pharmacists who were let go when big chains closed are now opening new drugstores, often in the same locations. In other areas, pharmacy owners from neighboring towns are opening new branches. Without them, numerous communities would have been left with no pharmacy.

It didn’t used to be this way. Big-box stores like Shopko started to move aggressively into the pharmacy market 30 years ago, hoping customers would fill their carts while the store filled their prescriptions. Large chains established beachheads in small towns by acquiring independent pharmacies or driving them out of business.

Pharmacist Rachel Hall helps customers at the NuCara pharmacy in Greenfield, Iowa. When a Shopko store — and the last pharmacy in the city of about 2,000 residents — closed, patients had to scramble to find places to fill their prescriptions until the NuCara opened. (Kathryn Gamble for KHN)

“The big-box stores came into smaller and smaller communities, and they, in essence, outcompeted all the other pharmacies in the area,” said David Zgarrick, a pharmacy professor at Northeastern University in Boston. “Now they’re completely gone and with them the pharmacy services and everything else they provided. They left a vacuum in a lot of these places.”

With CVS Health’s recent announcement that it will close 300 stores a year over the next three years, more towns could lose another tier of pharmacies: the big drugstore chains. CVS has not yet said which stores will close.

“We’re considering a number of factors when making these decisions, including local market dynamics, population shifts, store density, and the needs of underserved communities,” said Mike DeAngelis, a CVS Health spokesperson. “In fact, reaching underserved populations has been a priority for us all through the pandemic, such as the access to testing and vaccines we’ve provided.”

Kathleen Bashur, a spokesperson for the National Association of Chain Drug Stores, said chain pharmacies of all types and sizes play a significant role in meeting the health and wellness needs of communities throughout the nation. “The decision to close a store is a difficult one,” she said.

Zgarrick attributes much of the decline in big-box pharmacies to Amazon and other online merchants that undercut the profitability of their non-pharmacy sales. In the past, big-box stores could treat pharmacies as loss leaders and make up that revenue with sales of other goods. Now, Zgarrick said, big-box stores have to ask tough questions about how to allocate their space: “‘At the end of the day, how are we going to make the most money per square foot? Is it by having a pharmacy or by selling tires?’”

Nelson Lichtenstein, a University of California-Santa Barbara history professor who has chronicled the rise of Walmart, said big-box stores are constantly reevaluating their store locations, closing less profitable stores and opening new ones in places where they think they can make money.

“They just keep a kind of slow churn,” he said.

The cost of building a big-box store is about $10 million, Lichtenstein said, and such stores can net $200 million in annual revenue. Pulling out of a location is therefore not a huge loss for a big company if revenues falter.

“So they will shut down the stores and leave a devastated town because the Walmart put the other guys out of business,” he said.

Walmart did not answer questions about its closures. 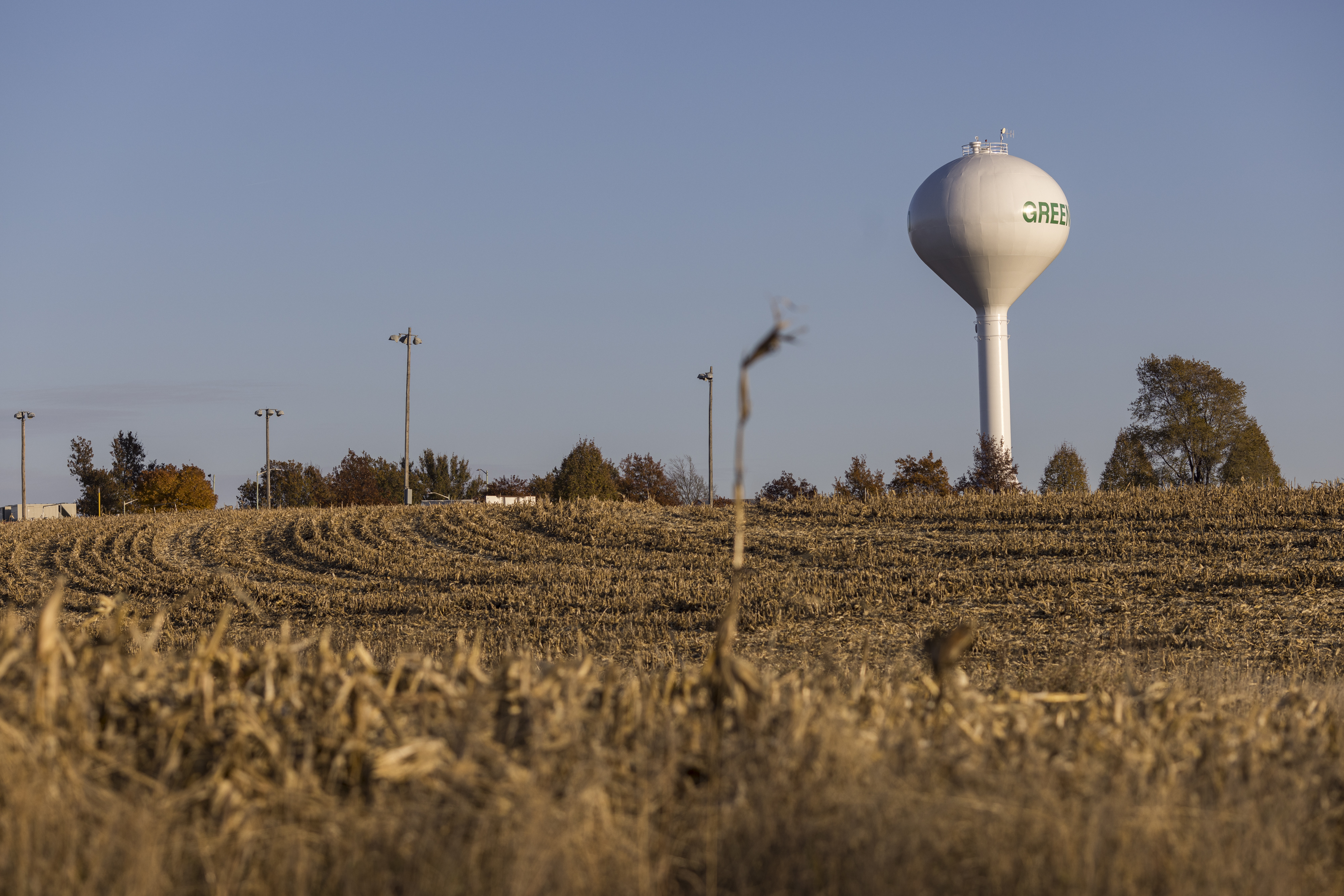 When the Shopko big-box store in Greenfield, Iowa, closed, its pharmacy’s records were sold to a Walgreens 50 miles away, leaving the city’s roughly 2,000 residents with no easy way to get their medications. (Kathryn Gamble for KHN)

The growth in online options for all kinds of items, spurred by people shopping from home during the covid-19 pandemic, has put further pressure on big-box stores.

“Now they’re less likely to do that roaming shopping than they were five years ago,” said Adam Hartung, a business strategy consultant with Spark Partners. “They’re not going to say, ‘Oh, let’s pick up a prescription and, while we’re at it, let’s walk through the store and look at vacuum cleaners.’ That doesn’t happen anymore.”

Hartung said that the U.S. retail market has an excess of shops, by as much as 40% compared with other countries, and that more big-box stores are likely to close in the coming years.

But closures provide opportunities for regional chains or pharmacists willing to strike out on their own.

In Orofino, Idaho, the mayor, the chamber of commerce and many residents appealed to pharmacist Rod Arnzen after Shopko pulled out. So Arnzen began delivering to Orofino from his store 23 miles away in Kamiah. He then opened a branch in Orofino in the building left behind by the pharmacy that had previously sold its business to Shopko.

Andy Pottenger, who owns a pharmacy 45 miles away in Lewiston, Idaho, added a second pharmacy in Orofino, population about 3,000, after receiving hundreds of responses to an ad he had placed in the local paper to gauge interest.

“It was overwhelming,” he said. “That kind of cemented the idea that we should do it.”

In Montana, Mike Matovich, a third-generation pharmacist, opened stores in Roundup and Hardin after Shopko closures there.

“It’s a pretty good-sized community and has a hospital and clinic in town,” Matovich said of Roundup, “and all of a sudden people are driving 50 miles one way to fill an antibiotic for a sick child.”

Matovich has seen what can happen when a rural community loses its only pharmacy.

“If there’s a hospital clinic and a pharmacy there, they’re going to do fairly well,” Matovich said. “Once you lose one or the other, the communities start to struggle because people start leaving to be closer to health care.”

For the residents of Greenfield, Iowa, Shopko’s decision meant they had to scramble. Shopko had sold the pharmacy records to a Walgreens 50 miles away. Some people turned to the Hy-Vee grocery stores in the nearby Iowa cities of Atlantic or Winterset, or to the Walmart in Creston — each at least a half-hour drive away. Others switched to mail order. 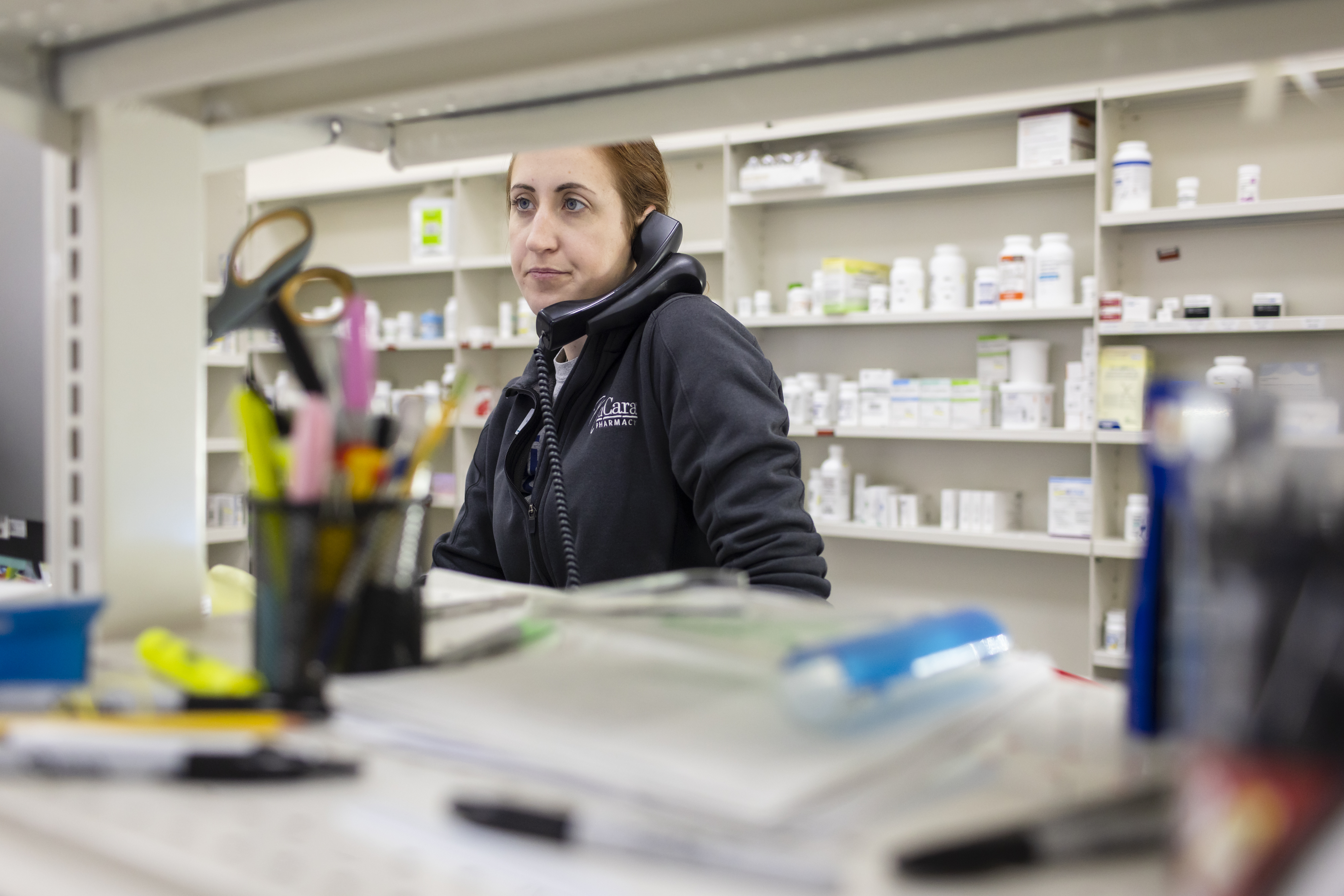 Pharmacist Rachel Hall was seven months pregnant when she learned her employer, Shopko, was shutting down its big-box store in Greenfield, Iowa, leaving her without a job and the city without a pharmacy. (Kathryn Gamble for KHN)

“It was sheer chaos,” former Shopko pharmacist Rachel Hall said. “People were trying to figure out what to do, where they should send their prescriptions.”

Mather, Hall and the rest of the Greenfield staff were given just one week’s notice after being told they had nothing to worry about. Their pharmacy had been among the chain’s fastest-growing locations.

“We literally had trophies from Shopko that we threw away when we left,” Hall said.

Former Shopko executives contacted by KHN declined interview requests. Shopko Optical, which operates in 11 states, said it is no longer affiliated in any way with Shopko Stores and declined to comment.

Mather and Hall didn’t want to give up on Greenfield. They reached out to NuCara, a chain with 30 retail pharmacies across five states, and it agreed to help them open a drugstore in their city.

NuCara opened pharmacies in two other communities that Shopko vacated. In the Minnesota cities of Cokato and North Branch, NuCara partnered with pharmacists who had previously sold their pharmacies to Shopko, said Brett Barker, vice president of pharmacies for NuCara.

In Greenfield, Hall and Mather were forbidden from telling customers about the new NuCara drugstore until Shopko officially closed its doors. Hall said Shopko management wanted to maintain the value of the customer files it was selling to Walgreens. So Hall and Mather asked the local chamber of commerce to get the word out.

They found temporary space at the local hospital, which relocated its billing office to accommodate them. A year later, they moved back into their former location in the old Shopko building, leasing the space from new owners, who were running a household goods store there.

After serving three generations of Greenfield customers, Mather was relieved the town still had a pharmacy. But he couldn’t get past how Shopko had ended things.

“The way they slammed the door, I was really unhappy about that,” Mather said. “It wasn’t fair to all the people at the Greenfield pharmacy and the people of Greenfield. Shopko couldn’t have cared less.”

Yet the move brought Mather full circle. Greenfield still has a pharmacy, just as when he started at Murdy Drug in 1968. It’s just a different storefront, with a new name on the sign. 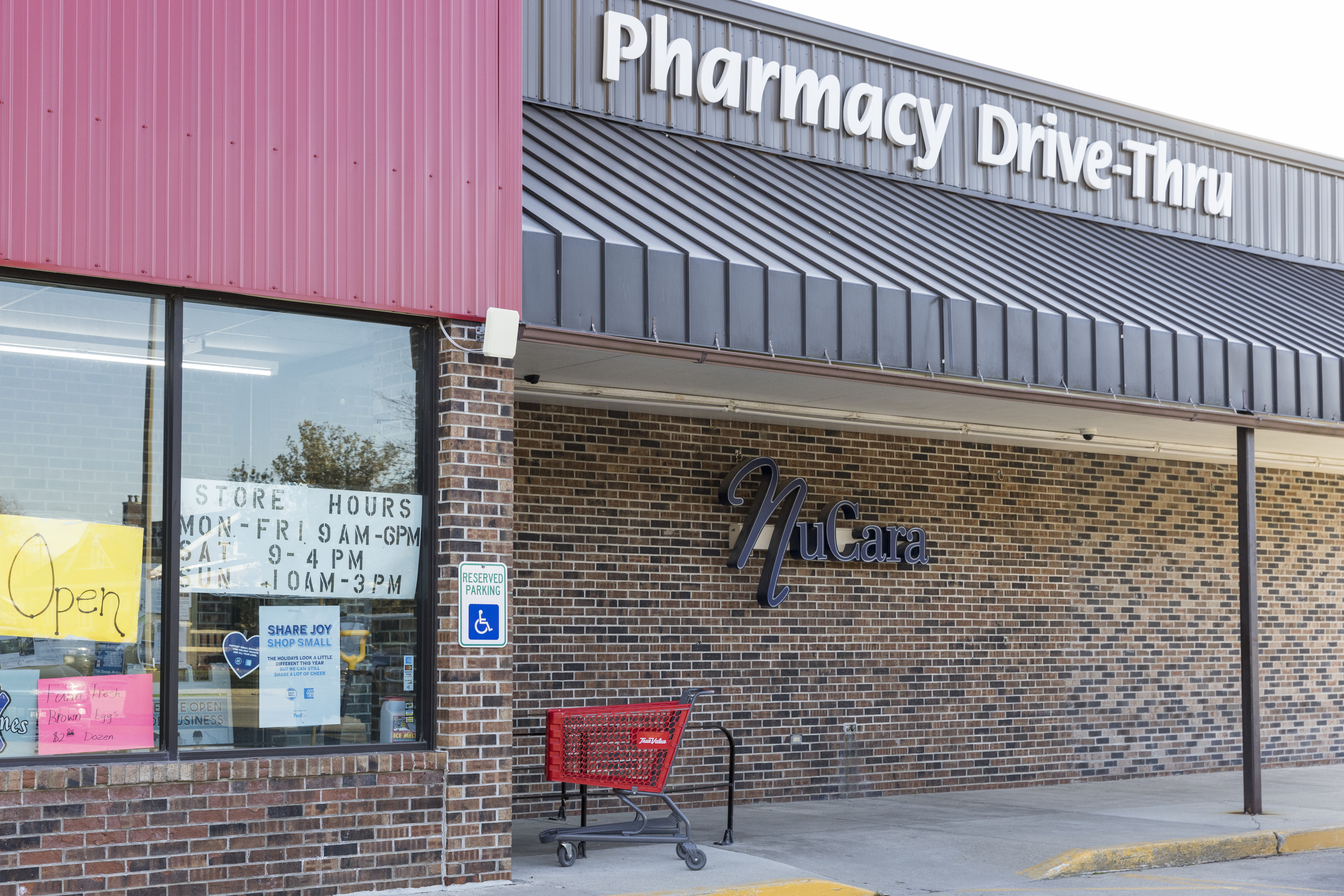 The NuCara pharmacy in Greenfield, Iowa, moved into the former space of a Shopko pharmacy a year after the Shopko big-box chain shuttered its store there and all its sites around the nation. (Kathryn Gamble for KHN)

Vaccine Promoters Struggle to Get People Boosted in California’s Fields

The Vaccine Rollout Was a Success. But Events Within and Beyond Biden’s Control Stymied Progress.