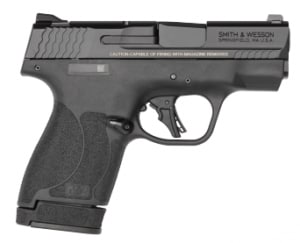 It doesn’t appear that Smith & Wesson did anything significant at first glance. The only difference in the micro-compact handguns is the “PLUS” text on the slide. But that doesn’t mean there aren’t other guns in the gun. S&W has taken its Shield pistol platform to a whole new level. The M&P9 SHIELD Plus increases the magazine capacity by up to two digits without any significant increase in size. This makes an old design a formidable competitor to some of today’s most innovative handguns.

The M&P Shield was launched in 2012 to capitalize on a booming concealed-carry market. NRA led a national movement to expand concealed carry laws at the state and federal levels. More than 40 states had passed right-to-carry legislation by 2012. A decade ago, there were far fewer options for those who needed a small handgun that could be used as a self-defense weapon. With its single-stack magazine and slim profile, the original M&P Shield offered a balance between pocket-sized semi-automatics and double-stack compacts. The M&P Shield was a huge success, and it has been expanded to include add-ons and enhancements. However, competitors soon caught up and launched guns like the SIG Sauer P365 and Springfield Armory Hellcat. Smith & Wesson’s Shield Plus addresses a market shortcoming, but retains and sometimes even enhances many of the details that made the gun so popular.

The Shield Plus magazine is the most significant change. S&W did not improve upon the original Shield’s single stack magazine. This is because the gun used a single-stack. The Shield has a slightly stubbed column, which reduces the overall height but doesn’t reduce the width. Smith has created a Shield Plus that is “stack and a half” in design. This can be seen by the Shield Plus magazine’s wider dimensions than the original Shield. The difference in width between the M&P Shield Plus and the original Shield is minimal. It measures 1.1 inches at its widest, compared to the original Shield’s 0.95″. The extra 0.15″ allows for a greater magazine capacity, ranging from a seven-round flush fit and an eight-round extended mag to a 10-round flush fit and a thirteen-round extended mag. The magazine body has a single-feed column at its top, as is the case with most handgun magazines. This particular point is visible on both the Shield Plus and the original Shield. It’s obvious that the original design was not a true single-stack. There’s still a taper to the magazine’s top column where the top round is given for battery. Each Shield Plus includes two stamped-steel magazines, one 10-rounder and one 13-round magazine. The latter has a flush-fit baseplate. Each magazine has witness holes on its right side that indicate the capacity of four to ten rounds at two-round intervals. The extended magazine also includes an additional hole that indicates full capacity at 13 rounds. The magazine spring is topped by a bright orange follower. This makes it easy to verify an empty magazine through the slide lock’s ejection port.

The new trigger is another major plus, despite the fact that the “Plus” moniker emphasizes the increased capacity of the new design. The Shield plus is the most notable difference from an exterior view. It’s the first M&P handgun to have a bladed trigger safety. S&W’s hinged trigger safety is a significant improvement over other striker-fired handguns. Instead of using the index finger of a shooter to press a blade, like the Glock system’s, S&W’s trigger safety disengaged when the shooter applied pressure to the trigger bow to release the safety. The trigger then travels rearward. While some prefer the feeling of a hinged safety to feel, others find it unnecessary travel and a spongy pull. With the Shield Plus, S&W seems to be moving along with the rest of pack towards the blade-in safety. The trigger face is also different. Shooters loved and hated the curved bow of the hinged safety triggers. Due to the strong aftermarket for S&W M&P triggers it was not surprising that many people didn’t like the design. They even spent extra money on drop-in parts to make the trigger feel better. The Shield Plus is a result of Smith & Wesson’s love for their Apex triggers.

S&W decided to abandon the hinged trigger design, but it was clear that they wanted to provide a balance with the new OEM trigger. The result is a beast. Although it isn’t a flat-faced trigger, it’s still not what most would consider a curved bow. It’s a combination of both worlds that creates a comfortable and intuitive touch point. The safety blade covers the trigger face and provides some resistance, before being flush with the trigger body. The entire assembly will move backwards smoothly once the safety blade is removed. It will eventually hit a wall. A little more pressure and you’ll feel a sudden break, followed by some overtravel. Shooters will feel and hear the short-reset point after a controlled release. Like the original hinged S&W design, both the trigger body and blade safety are made from polymer. The Shield Plus has a completely new trigger design. This means that any aftermarket parts originally designed for the M&P Shield won’t work with it. The Shield Plus trigger is much more reliable than the original M&P Shield. However, this may help to deter tinkerers.

Journalism is central to democracy. Support it.

White House knew January 6 would get out of hand