In California Nursing Homes, Omicron Is Bad, but So Is the Isolation 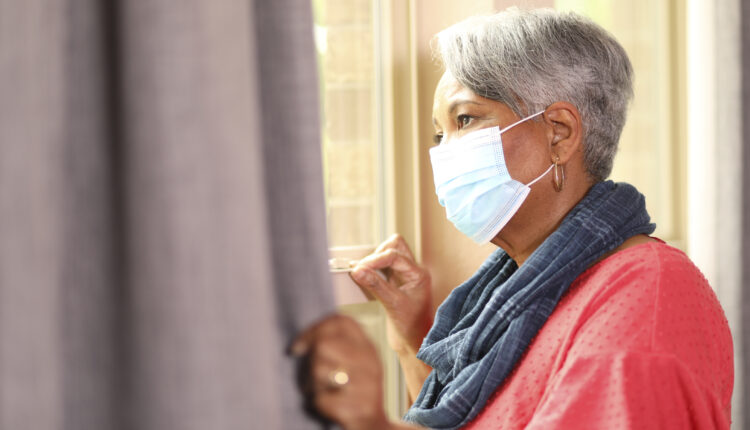 Dina Halperin had been cooped up alone for three weeks in her nursing home room after her two unvaccinated roommates were moved out at the onset of the omicron surge. “I’m frustrated,” she said, “and so many of the nursing staff are burned out or just plain tired.”

The situation wasn’t terrifying, as it was in September 2020, when disease swept through the Victorian Post Acute facility in San Francisco and Halperin, a 63-year-old former English as a Second Language teacher, became severely ill with covid. She spent 10 days in the hospital and required supplemental oxygen. Since the pandemic began, 14 residents of the nursing home have died of covid, according to state figures.

Over time, Victorian Post Acute has gotten better at dealing with the virus, especially its milder omicron form, which accounted for 31 cases as of Jan. 27 but not a single illness serious enough to cause hospitalization, said Dan Kramer, a spokesperson for Victorian Post Acute. But the ongoing safety protocols at this and other nursing homes — including visitor restrictions and frequent testing of staff and residents — can be soul-killing. For the 1.4 million residents of the nation’s roughly 15,000 nursing homes, the rules have led to renewed isolation and separation.

“I’m feeling very restless,” Halperin said. She has Cushing’s syndrome, an autoimmune disease that caused tumors and a spinal fracture that left her mostly wheelchair-bound and unable to live independently. Although she has residual covid symptoms, including headaches and balance problems, Halperin, who has lived in the nursing home for nine years, is usually quite sociable. She volunteers in the dining room, helps other residents with their activities, and shops and runs errands during her frequent forays outside the building.

But covid infections are again spiking at nursing homes around the country. In California, 792 new nursing home cases were reported on Jan. 19, compared with fewer than 11 cases on Dec. 19, 2021. However, the death rates are not nearly as bad as they were during pre-vaccine covid surges. From Dec. 23, 2021, to Jan. 23, 2022, 217 nursing home residents died of covid in California. By contrast, in just the week from Christmas 2020 to New Year’s Day 2021, 555 people died at nursing homes in the state.

Those numbers, and others cited in this article, don’t filter out patients who entered hospitals for treatment of other conditions but tested positive for covid upon admission — a common occurrence during the omicron wave.

To keep nursing home residents out of overwhelmed hospitals, California public health officials have mandated masking and imposed strict vaccination and testing requirements for visitors and staffers at the homes, said Dr. Zachary Rubin, a medical epidemiologist with the Los Angeles County Department of Public Health. “Our approach is to prevent cases from coming into the facility, stop transmission once it gets into the facility, and to prevent serious outcomes,” he said.

Rubin acknowledged that some of these policies may seem like they’re doing more harm than good — but only temporarily, he hopes.

The omicron surge has created staffing shortages as nurses and aides call in sick, and the strict testing requirements have the effect of limiting visits by friends and relatives who provide crucial care and contact for some residents, bathing and grooming them, overseeing their diets and medications, and making sure they’re not being neglected.

Nationally, a federal mandate requires all workers in federally funded facilities to be fully vaccinated by Feb. 28. The deadline was extended to March 15 for 24 states that challenged the requirement in court. Last month, California issued a similar order, which also requires nursing home staffers to receive booster shots by Feb. 1.

However, while vaccination rates for staff members and residents are high in California (96% for staffers and 89% for residents), only 52% of nursing home workers and 68% of their residents in California have received boosters, according to Jan. 23 figures from the Centers for Disease Control and Prevention. At Victorian Post Acute, 95% of staff and 92% of residents had been vaccinated with boosters as of Jan. 27, Kramer said.

Across the state, many unvaccinated staff members claim religious exemptions. Others say they can’t get vaccinated at their workplaces and don’t have time to get shots on their own, said Deborah Pacyna, a spokesperson for the California Association of Health Facilities, which represents the nursing home industry in Sacramento.

“We’re going to have to deal with that as the deadline approaches. If they’re not boosted, does that mean they can’t work?” she asked. “That would be an extraordinary development.”

The state hasn’t indicated how it will enforce mandates, especially for boosters, said Tony Chicotel, a staff attorney for California Advocates for Nursing Home Reform.

Most nursing home visitors, as of Jan. 7, must be fully vaccinated — including boosters, if eligible — under California Department of Public Health requirements. Guests also must present a negative covid test taken within one or two days, depending on the type of test. The federal government is sending four rapid tests to families that request them, and the state of California has distributed 300,000 tests to nursing homes.

That’s “better than nothing,” said Pacyna, but it may not be enough for families that visit several times a week. Some experts think any policy that tends to restrict visitors sets the wrong priority.

“Limiting visitation is bad psychologically,” said Charlene Harrington, a professor emeritus in social and behavioral sciences at the University of California-San Francisco who has done extensive research on nursing homes. Numerous studies have shown that social isolation and loneliness can lead to depression, worsening dementia and cognitive decline, anxiety, a loss of the will to live — and increased risk of mortality from other causes.

Besides, Harrington said, most nursing home outbreaks are caused by infected staffers, who often work multiple jobs because of the low pay.

Maitely Weismann visits her 79-year-old mother, who has dementia and uses a wheelchair, at a Los Angeles residential facility several times a week. Her mother deteriorated considerably during the initial lockdown, and Weismann is doing her best to slow her mother’s decline, she said.

“It’s much harder to do this during the pandemic because there are so many barriers to entry,” said Weismann, co-founder of the advocacy group Essential Caregivers Coalition. “Family caregivers can’t actually tell if a loved one is doing OK through a screen, or a window, or a phone call.”

Responding to the critical health care staff shortages, the CDC issued emergency guidelines in December — California followed suit in January — that allow workers who have been exposed to or test positive for covid to return to work if they are asymptomatic.

It’s a short-term, last-resort measure, Rubin said. “It’s just not possible to adequately take care of people and do the daily activities of living if you don’t have a nurse or caregivers. You just can’t operate the place.”

On one recent day alone — Jan. 24 — more than 10,300 workers were out sick — which is roughly a tenth of the combined staff in California nursing homes. To deal with the crunch, said Pacyna, “we’re asking people to work extra hours, knowing that the peak is near and this isn’t going to last forever.”

In the meantime, families continue to worry about their loved ones. “When residents are isolated, they become completely dependent on the caregivers in the facility,” Weismann said. “But when staff stops coming to work, the system falls apart.”