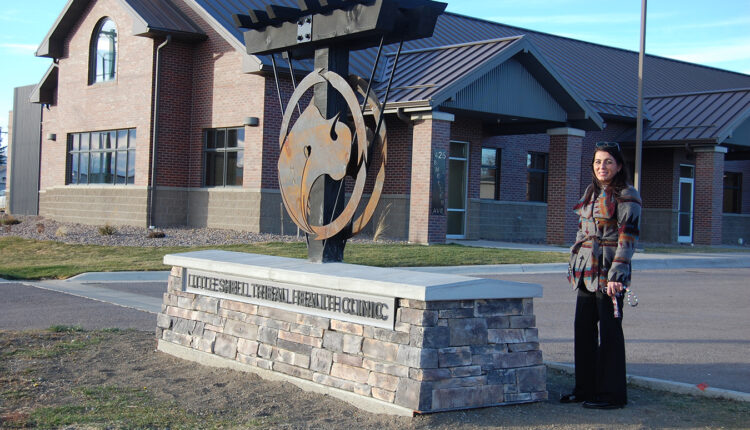 GREAT FALLS, Mont. — Louella Fredrickson has long created workarounds to fill gaps in the spotty medical care available to her as a member of the Little Shell Tribe of Chippewa Indians of Montana.

The 86-year-old uses dollar-store reading glasses to improve her blurry vision because she’s worried about the cost of an eye appointment. And when she needed hearing aids, she was told it would cost her more than $1,300. So Fredrickson asked a doctor to tweak her husband’s old pair to fit her smaller ears. “My husband had only used them for a few months before he died, so they work OK,” Fredrickson said.

But one thing she hasn’t solved is the 200-mile round trip from her home in Great Falls to the closest Indian Health Service clinic that offers such services to tribal members for free.

Soon, though, getting care will be easier for Fredrickson and other Little Shell members living in and around Great Falls. The Little Shell Tribal Health Clinic is slated to open in this city of about 60,000 people on Jan. 31, roughly two years after the tribal nation achieved its long-sought federal recognition.

For the first time, Little Shell members will have guaranteed access to health services — and see their culture reflected in the offerings. The brick-and-mortar hub is a powerful symbol for a tribe that lacks a reservation, especially given the clinic’s focus on providing care to people who have faced long-standing health barriers that the pandemic underscored.

The building is a tangible example of what Little Shell can become, said tribal member Darrel Rummel, 81. “The clinic, it’s going to be the heart of it all.”

As members of the Little Shell Tribe of Chippewa Indians of Montana, Darrel Rummel (left) and best friend Louella Fredrickson have routinely driven hundreds of miles from their homes in Great Falls, Montana, for medical care. Soon they’ll have a closer option because their tribe is opening its own clinic in the city, one of the newest Indian Health Service sites in the U.S.(Katheryn Houghton / KHN)

Little Shell became the United States’ 574th federally recognized Indigenous tribe in December 2019, roughly 150 years after Little Shell leaders began advocating for the tribe to be acknowledged as a sovereign nation. That recognition came just months before the covid-19 pandemic took hold and disproportionately killed Indigenous people due to entrenched structural health inequities. Of the nearly 2,800 Montanans who had died by Dec. 3 from covid complications, 12% identified as Native American. Indigenous people make up an estimated 7% of the state’s total population.

Amid the health crisis, the Little Shell Tribe used federal pandemic relief dollars to fast-track the opening of its clinic. It will offer primary and behavioral health care, plus dental, vision, pharmaceutical, lab, and radiological services.

The tribe has had free access to Indian Health Service clinics statewide since Montana recognized it as a tribal nation in 2000. But such clinics can be scattered far afield and, even then, medical services vary. Little Shell members said their access has faltered when health facility budgets tighten and the clinics must prioritize care for tribal members affiliated with local reservations.

Molly Wendland, Little Shell’s tribal health director, said that the new clinic, initially run by the Indian Health Service, will be open to any member of a tribal nation and that the tribe hopes to eventually expand services to anyone else after it takes over daily operations. IHS will oversee it for at least three years.

“Making our community and our members healthy means we have a healthy tribe,” she said. “I wanted this clinic to be comfortable and something new and nice. Our members deserve that.”

On a recent day, Wendland smiled as she pointed to the word boozhoo on the clinic’s entrance, welcoming people with the word in the Ojibwe language that means “greetings.” Inside, above the reception desk, is a massive image of Ayabe-Way-We-Tung, also known as Chief Little Shell III, who began pushing the U.S. government for a reservation in 1872. Historical photos of Little Shell people are displayed nearby. Lines of gray and burnt orange take the shape of abstract tepees along the clinic’s walls and floors. 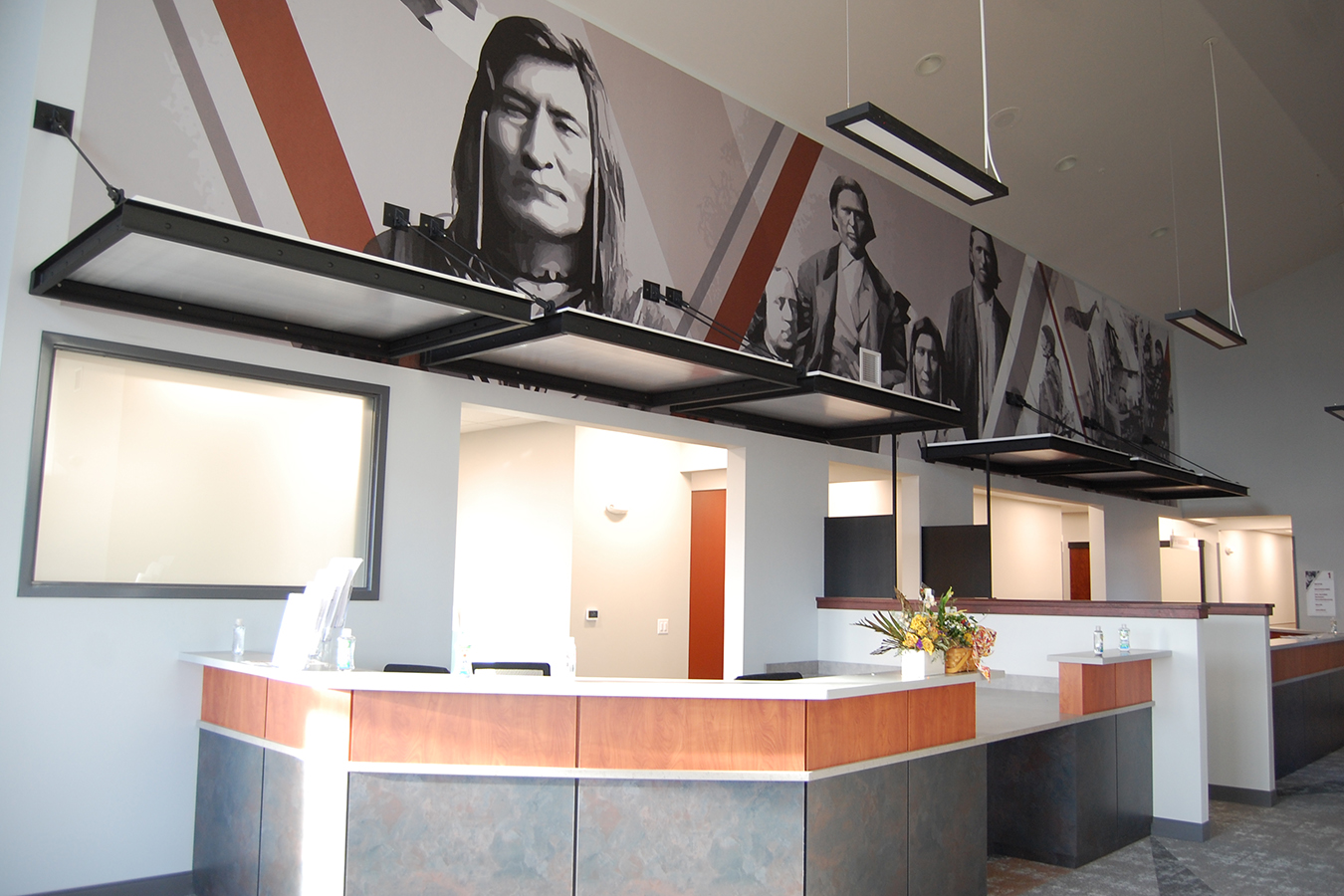 An image of Ayabe-Way-We-Tung, the chief of the Little Shell Tribe of Chippewa Indians who began pushing the U.S. government for a reservation in the 1870s, adorns the wall in the Little Shell Tribal Health Clinic lobby. The mural is a reminder of the tribal nation’s long push for federal recognition, which was granted in December 2019. (Katheryn Houghton / KHN)

Plaques, designed with help from the tribe’s language students, name clinic rooms after animals in Ojibwe, such as waagosh alongside its English translation, “fox.” For rooms Wendland calls “talking rooms,” two chairs face each other in place of an exam table and a doctor’s stool, which she said lends more to a conversation between patient and provider. “It really takes down that power differential,” she said.

Upstairs is a small apartment, which Wendland hopes will serve as a place for traveling doctors to stay when they come to offer additional services, such as fittings for hearing aids.

Another room on the main floor is the smudge room, where patients can burn plants such as sage in a ceremony to cleanse a person or place.

“This is a place to pray and just for families to kind of catch their breath,” Wendland said. “If people are going to have to travel, I want everything they need to be here.”

The Little Shell headquarters is in Great Falls, though many members are scattered across Montana, Washington, and beyond. The tribe is still trying to set up ride programs for its members who live in rural parts of Montana.

But for those tribal members in central Montana, the clinic’s opening will be an immediate benefit. Sherlie Bolich, 76, of Great Falls said she has sometimes waited for services amid backlogs of patients at other tribes’ facilities.

When Bolich’s kids were in high school, she changed jobs for more flexible hours to take her kids on the four-hour round-trip drive to a clinic in Browning. Years later, she made those same trips when her aging mom needed more frequent medical care.

Even then, Bolich said, Indian Health Service clinics have felt like safe spaces because Indigenous people are the minority elsewhere, and the costs of health care services outside the federal health service can outpace paychecks — even with insurance. Yet now she’s excited to have something closer, something for her tribe.

“With the clinic here, you feel that you’ve got somebody here watching out for your people and all of us,” Bolich said. “My grandchildren will be able to go in and see somebody right away.” 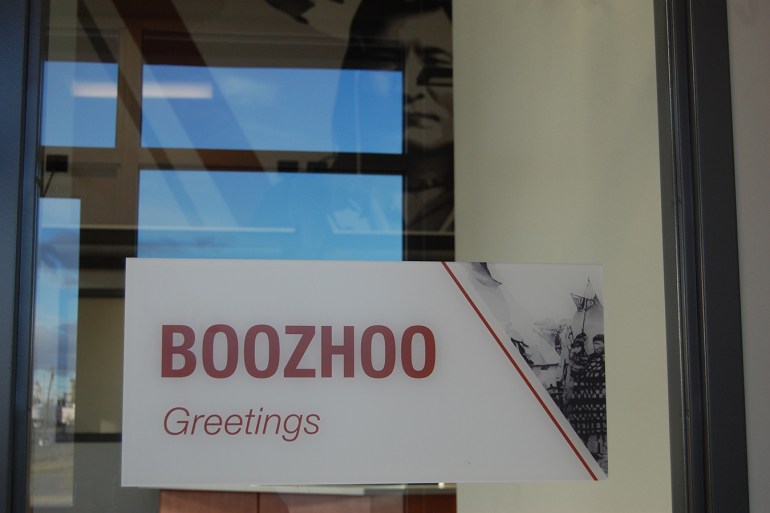 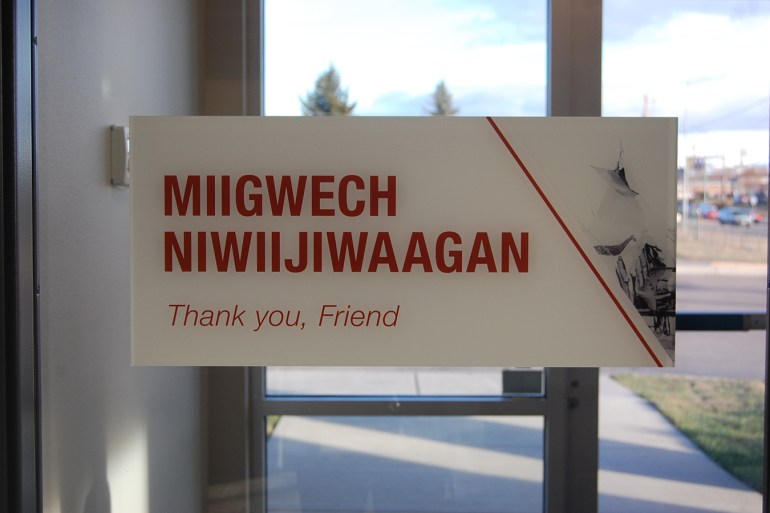 Little Shell member Rummel also has long traveled beyond Great Falls to places such as Browning for care. Since last fall, she has had spells of vertigo that can make it hard to stand and said she was told she would have to wait until spring to see a doctor.

At the Little Shell clinic’s recent open house, Rummel said, she wore a pair of beaded earrings and a traditional ribbon skirt, with pink, blue, purple, yellow, and white ribbons wrapped horizontally down to just above her moccasins. She’s proud to see her tribal nation reflected on the new clinic’s walls. Like many Little Shell members, Rummel said, she grew up in a predominately non-Indigenous culture and is still working to learn the traditions of her people.

She immediately noticed the Ojibwe words printed on the clinic’s doors and walls — the first time she had seen her tribe’s language in a permanent spot. “I was so impressed with that, I thought, ‘That’s going to help us learn our language,’” Rummel said.

And, she said, she hopes she can finally get those dizzy spells checked out once the clinic opens its doors.