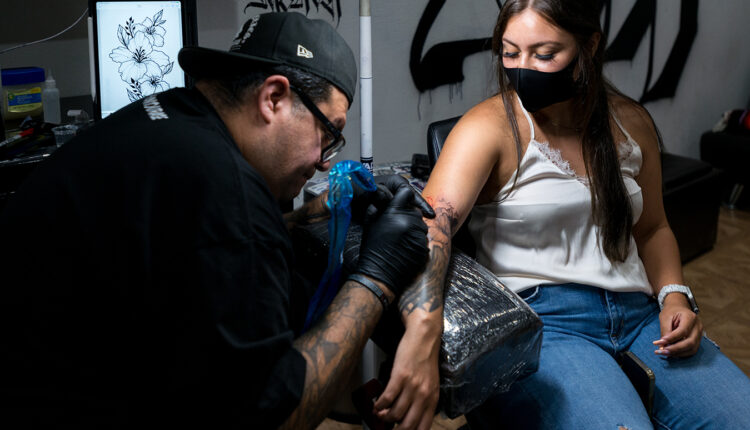 It was Saturday morning at Southbay Tattoo and Body Piercing in Carson, California, and owner Efrain Espinoza Diaz Jr. was prepping for his first tattoo of the day — a memorial portrait of a man that his widow wanted on her forearm.

Diaz, known as “Rock,” has been a tattoo artist for 26 years but still gets a little nervous when doing memorial tattoos, and this one was particularly sensitive. Diaz was inking a portrait of Philip Martin Martinez, a fellow tattoo artist and friend who was 45 when he died of covid-19 in August.

A stencil of Philip Martin Martinez sits on Efrain Espinoza Diaz Jr.’s table. Anita Martinez chose the same portrait of her husband that is etched on his tomb.(Heidi de Marco / KHN)

Martinez, known to his friends and clients as “Sparky,” was a tattoo artist of some renown in nearby Wilmington, in Los Angeles’ South Bay region. A tattoo had brought Sparky and Anita together; Sparky gave Anita her first tattoo — a portrait of her father — in 2012, and the experience sparked a romance. Over the years of their relationship, he had covered her body with intertwining roses and a portrait of her mother.

Now his widow, she was getting the same photograph that was etched on Sparky’s tomb inked into her arm. And this would be her first tattoo that Sparky had not applied.

“It feels a little odd, but Rock has been really good to us,” Anita Martinez said. Rock and Sparky “grew up together.” They met in the 1990s, at a time when there were no Mexican-American-owned tattoo shops in their neighborhood but Sparky was gaining a reputation. “It was artists like Phil that would inspire a lot of us to take that step into the professional tattoo industry,” Rock said. 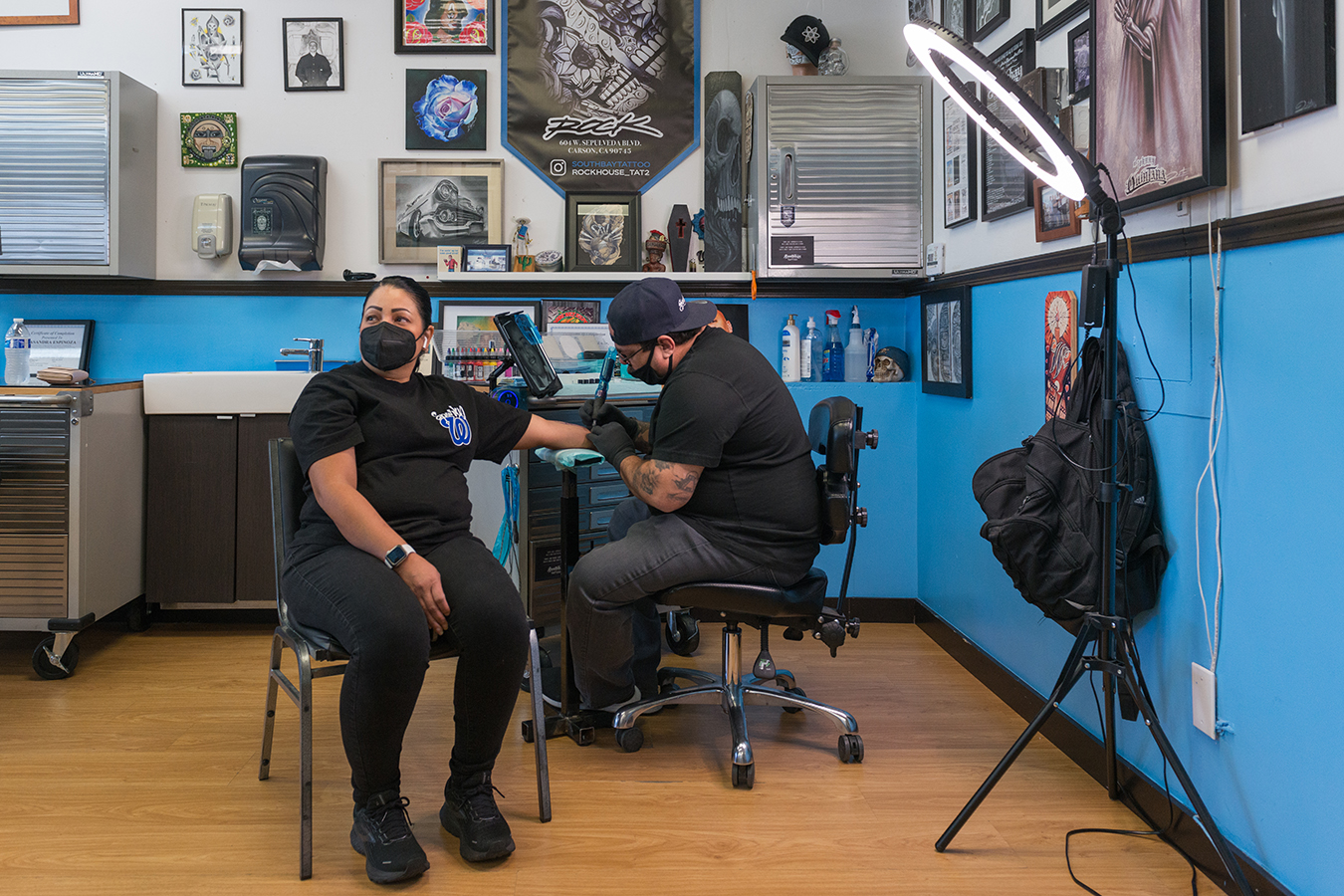 Diaz tattoos the arm of his friend’s widow, Anita Martinez, at Southbay Tattoo and Body Piercing in Carson, California. Martinez lost her husband to covid and chose to memorialize him by tattooing his portrait on her forearm. (Heidi de Marco / KHN)

After Sparky got sick, Anita wasn’t allowed in her husband’s hospital room, an isolating experience shared by hundreds of thousands of Americans who lost a loved one to covid. They let her in only at the very end.

“I don’t even know if I’m ever going to heal,” she said, as Diaz began sketching the outlines of the portrait below her elbow, “but at least I’ll get to see him every day.” 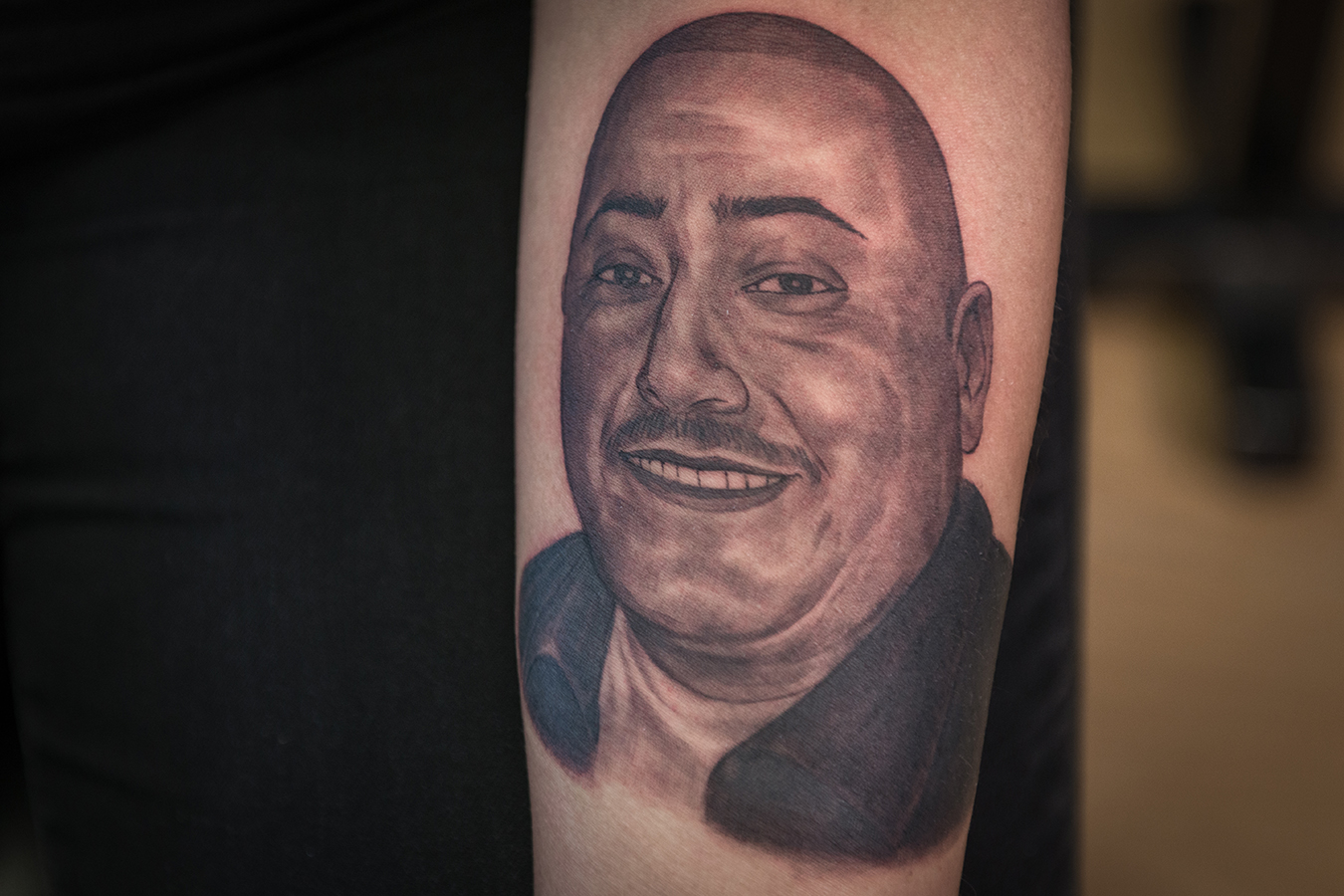 The tattooed portrait of Philip Martin Martinez on Anita’s arm. She chose to get it on her forearm so she could see it every day. (Heidi de Marco / KHN)

According to a 2015 Harris Poll, almost 30% of Americans have at least one tattoo, a 10% increase from 2011. At least 80% of tattoos are for commemoration, said Deborah Davidson, a professor of sociology at York University in Toronto who has been researching memorial tattoos since 2009.

“Memorial tattoos help us speak our grief, bandage our wounds and open dialogue about death,” she said. “They help us integrate loss into our lives to help us heal.”

Covid, sadly, has provided many opportunities for such memorials. 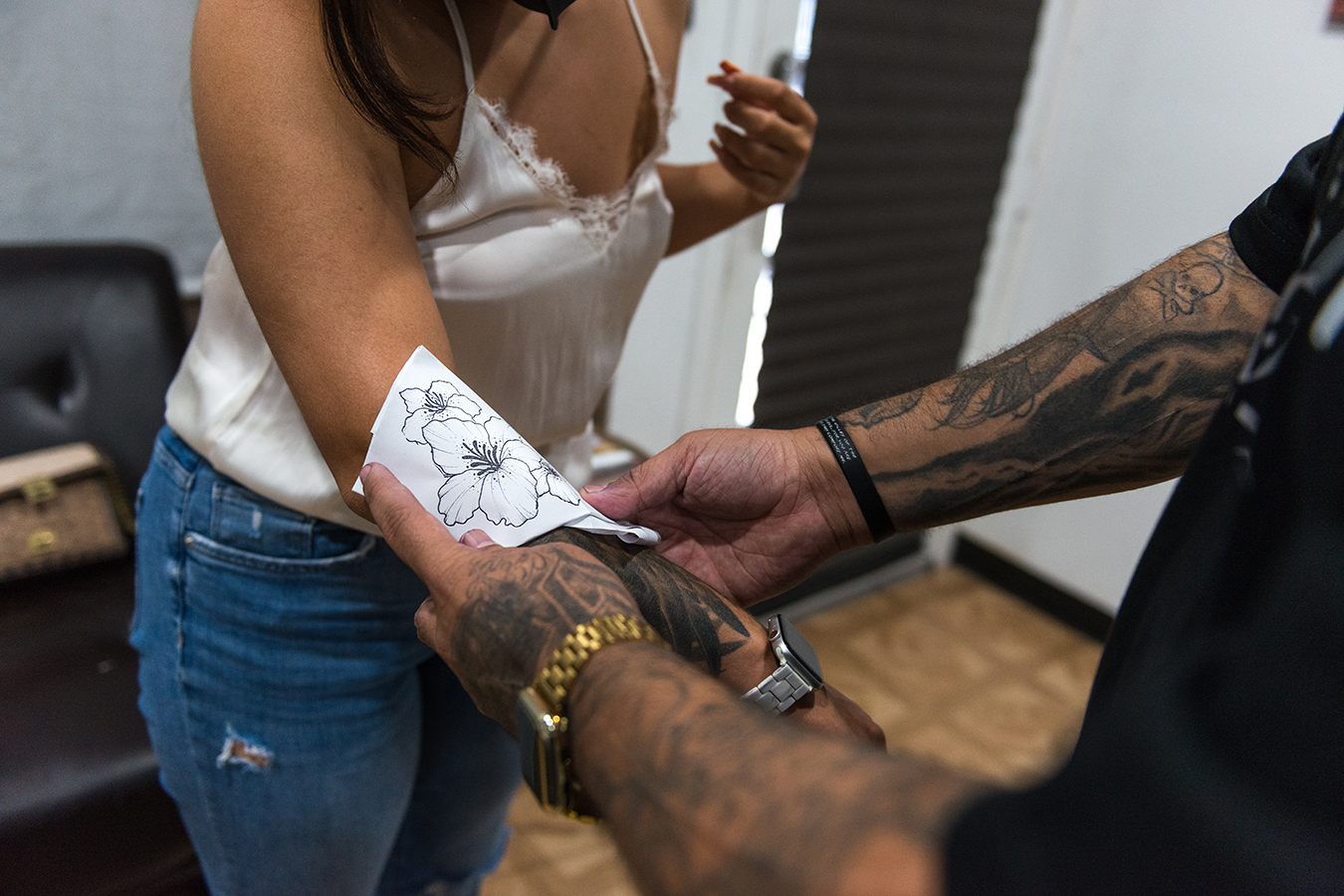 Juan Rodriguez, a tattoo artist who goes by “Monch,” has been seeing twice as many clients as before the pandemic and is booked months in advance at his parlor in Pacoima, an L.A. neighborhood in the San Fernando Valley. Memorial tattoos, which can include names, portraits and special artwork, are common in his line of work, but there’s been an increase in requests due to the pandemic. “One client called me on the way to his brother’s funeral,” Rodriguez said.

Rodriguez thinks memorial tattoos help people process traumatic experiences. As he moves his needle over the arms, legs and backs of his clients, and they share stories of their loved ones, he feels he is part artist, part therapist.

Healthy grievers do not resolve grief by detaching from the deceased but by creating a new relationship with them, said Jennifer R. Levin, a therapist in Pasadena, California, who specializes in traumatic grief. “Tattoos can be a way of sustaining that relationship,” she said.

It’s common for her patients in the 20-to-50 age range to get memorial tattoos, she said. “It’s a powerful way of acknowledging life, death and legacy.” 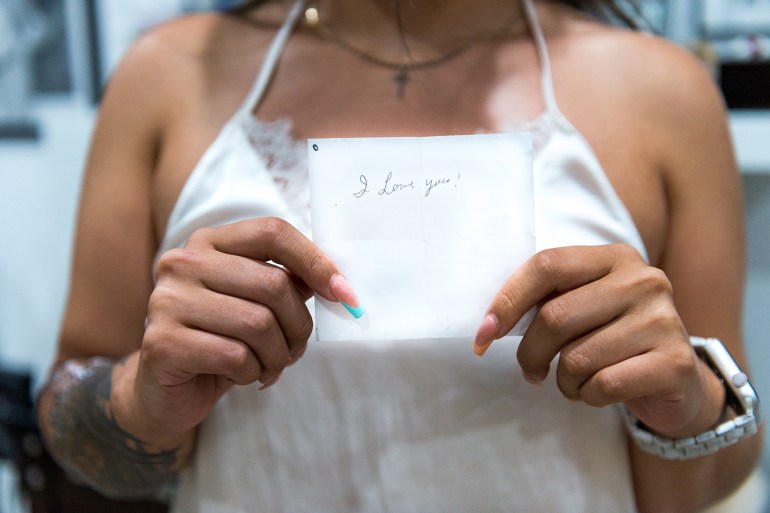 Sazalea Martinez, a kinesiology student at Antelope Valley College in Palmdale, California, holds a handwritten note from her grandmother with the phrase “I love you.” (Heidi de Marco / KHN) 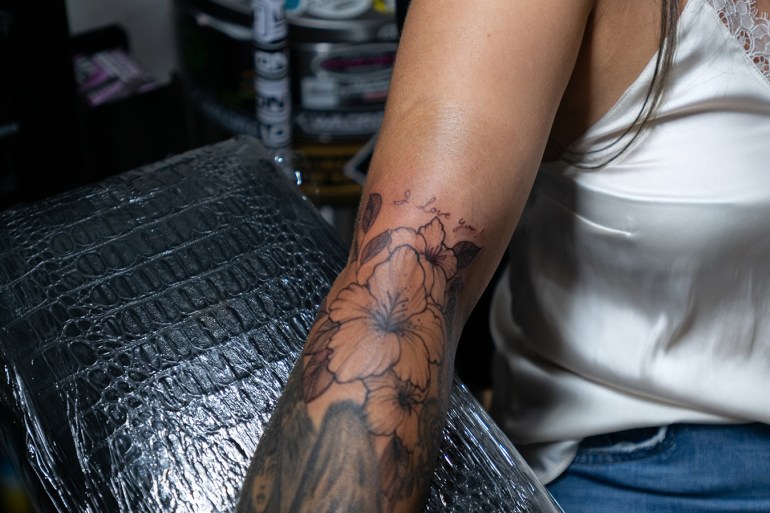 Martinez says she’s still mourning her grandparents’ deaths. “It’s hard to connect the two,” she says. “I know they passed away from covid, but to me it just feels like pain.” (Heidi de Marco / KHN)

Sazalea Martinez, a kinesiology student at Antelope Valley College in Palmdale, California, came to Rodriguez in September to memorialize her grandparents. Her grandfather died of covid in February, her grandmother in April. She chose to have Rodriguez tattoo an image of azaleas with “I love you” written in her grandmother’s handwriting.

The azaleas, which are part of her name, represent her grandfather, she said. Sazalea decided not to get a portrait of her grandmother because the latter didn’t approve of tattoos. “The ‘I love you’ is something simple and it’s comforting to me,” she said. “It’s going to let me heal and I know she would have understood that.”

Sazalea teared up as the needle moved across her forearm, tracing her grandmother’s handwriting. “It’s still super fresh,” she said. “They basically raised me. They impacted who I am as a person, so to have them with me will be comforting.” 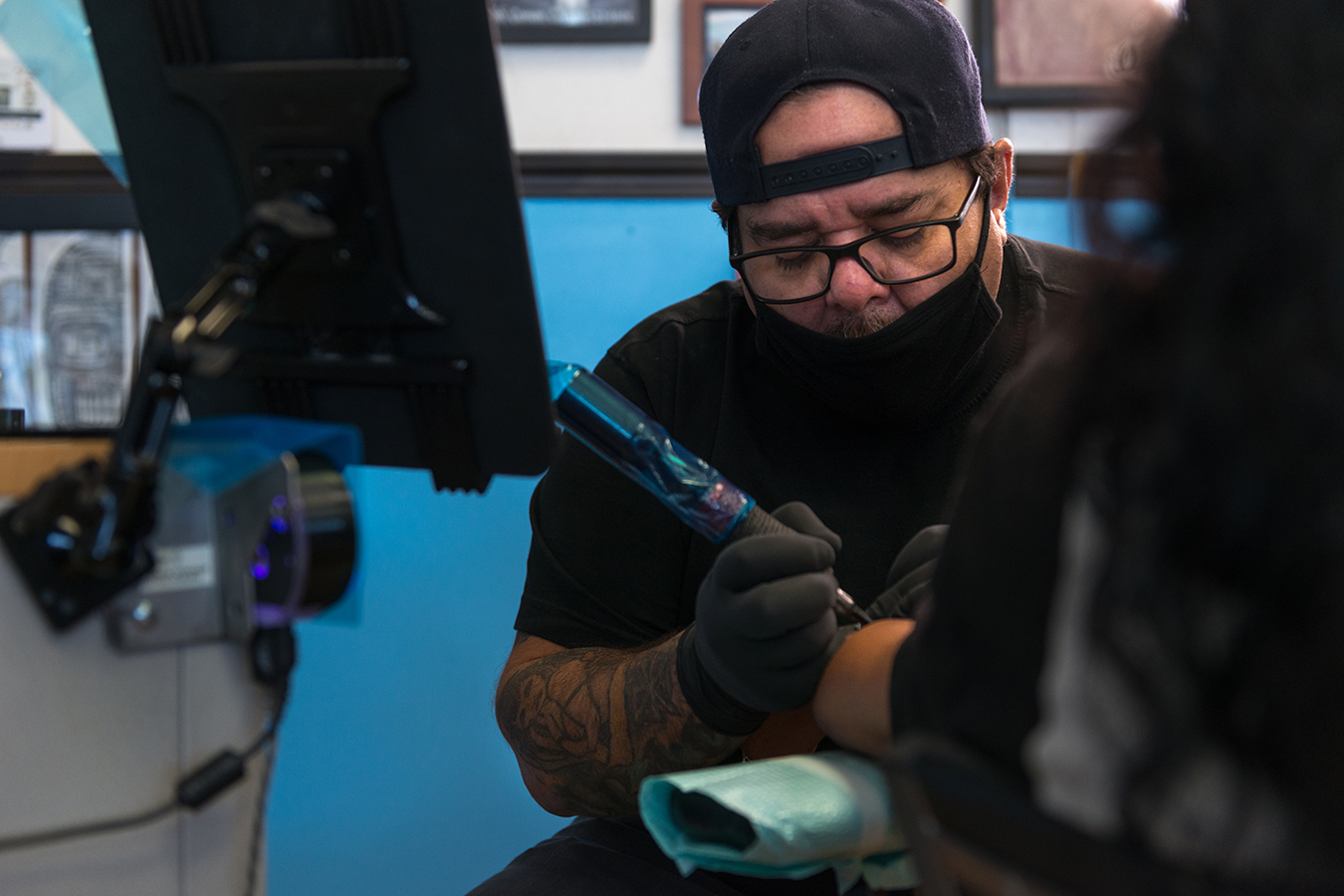 Efrain Espinoza Diaz Jr., known as “Rock,” says tattoos can be like therapy for people who have lost loved ones.(Heidi de Marco / KHN)

When the Eye on Older Patients Is a Camera