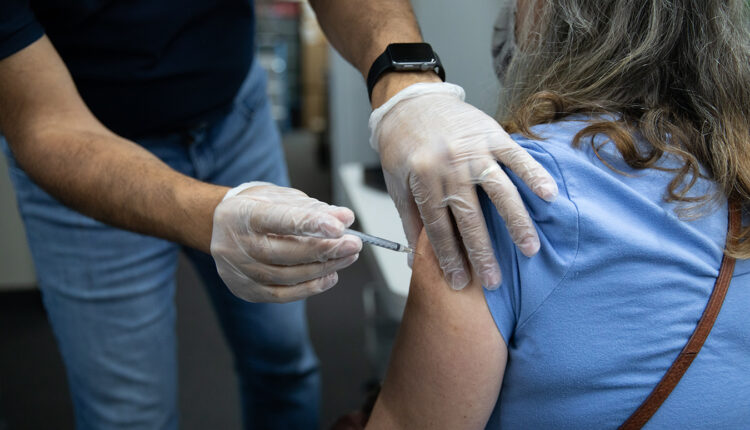 The Centers for Disease Control and Prevention reached out to pharmacists Wednesday to reinforce the message that people with moderate to severe immune suppression are eligible for fourth covid shots.

The conference call came a day after KHN reported that immunocompromised people were being turned away by pharmacy employees unfamiliar with the latest CDC guidelines.

White House chief of staff Ron Klain tweeted Wednesday morning that “immune-compromised people should get the shots they need,” adding that the CDC “is going to send stronger messages to pharmacies to make sure this happens.”

The CDC “reiterated the recommendations, running through case examples,” said Mitchel Rothholz, chief of governance and state affiliates for the American Pharmacists Association, who joined the CDC call.

Rothholz said he “asked for a prepared document … that clearly laid out the recommendations … so we can clearly and consistently communicate the message. They said they would but don’t know how long that will take.”

The CDC recommends one additional shot for the 7 million American adults whose weak immune systems make them more vulnerable to covid infection and death. This group includes people with medical conditions that impair their immune response to infection, as well as people who take immune-suppressing drugs because of organ transplants, cancer, or autoimmune diseases. Although people with obesity or diabetes are at high risk of developing severe disease or dying from covid, they’re not considered immunocompromised.

For other people ages 5 or older, the CDC recommends a primary vaccine series of two doses of mRNA vaccine. Adults also may receive the one-dose Johnson & Johnson vaccine, which the CDC says may be safer for people who have had a severe allergic reaction to an mRNA vaccine.

Anyone older than 12 can get one booster dose to combat waning immunity five months after the last shot in their primary series, regardless of which vaccine they received. Vaccines are not yet authorized for children younger than 5.

The CDC first recommended fourth shots for immunocompromised people in October. The agency has been working to educate pharmacists and other health providers since then, said CDC spokesperson Kristen Nordlund. Those efforts included a conference call with health officials from every state that had thousands of participants, as well as an additional call to physicians. The CDC has streamlined its website with booster advice several times. In its guidance to pharmacists, the CDC notes that patients don’t need to provide proof that they are immunocompromised.

Alyson Smith, who was turned away from a Walgreens drugstore after booking a vaccine appointment online, said she was pleased that the CDC is trying to help.

“I appreciate that the CDC is listening to patient and physician concerns and hope they will examine their processes for clear messaging and comprehensive dissemination of information,” Smith said.

In a statement before the publication of KHN’s first story, Walgreens said it continuously updates its pharmacists on new vaccine guidance.

Some health care leaders said the CDC should have done a better job of publicizing its advice on booster shots for the immunocompromised.

The call with pharmacists “should have been done many weeks ago,” said Dr. Eric Topol, founder and director of the Scripps Research Translational Institute. “I’m glad that the White House team is finally pushing forward on this.”

Dr. Ameet Kini, a professor of pathology and laboratory medicine at Loyola University Chicago Stritch School of Medicine, said he hopes the large pharmacies that have been turning people away will issue news releases and update their websites “explicitly stating that they are offering fourth doses” to immunocompromised people. He said pharmacies also need to update their patient portals and provide “clear guidance for their pharmacists.”

Resistance to a Boston Hospital’s Expansion Centers on Rising Prices