Black Tech Founders Want to Change the Culture of Health Care, One Click at a Time 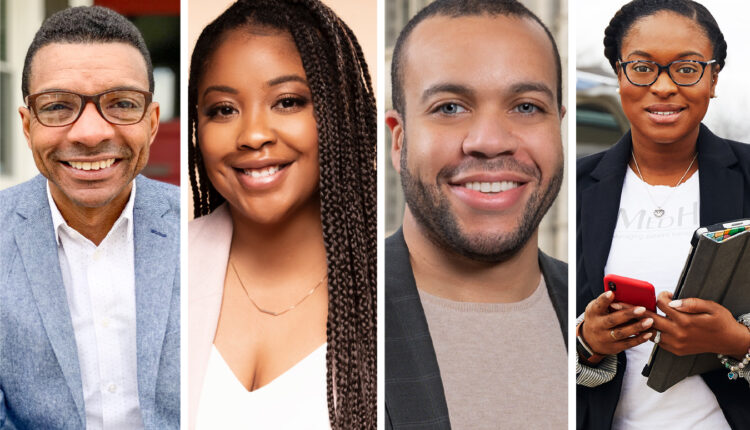 When Ashlee Wisdom launched an early version of her health and wellness website, more than 34,000 users — most of them Black — visited the platform in the first two weeks.

“It wasn’t the most fully functioning platform,” recalled Wisdom, 31. “It was not sexy.”

But the launch was successful. Now, more than a year later, Wisdom’s company, Health in Her Hue, connects Black women and other women of color to culturally sensitive doctors, doulas, nurses and therapists nationally.

As more patients seek culturally competent care — the acknowledgment of a patient’s heritage, beliefs and values during treatment — a new wave of Black tech founders like Wisdom want to help. In the same way Uber Eats and Grubhub revolutionized food delivery, Black tech health startups across the United States want to change how people exercise, how they eat and how they communicate with doctors.

Inspired by their own experiences, plus those of their parents and grandparents, Black entrepreneurs are launching startups that aim to close the cultural gap in health care with technology — and create profitable businesses at the same time.

“One of the most exciting growth opportunities across health innovation is to back underrepresented founders building health companies focusing on underserved markets,” said Unity Stoakes, president and co-founder of StartUp Health, a company headquartered in San Francisco that has invested in a number of health companies led by people of color. He said those leaders have “an essential and powerful understanding of how to solve some of the biggest challenges in health care.”

Platforms created by Black founders for Black people and communities of color continue to blossom because those entrepreneurs often see problems and solutions others might miss. Without diverse voices, entire categories and products simply would not exist in critical areas like health care, business experts say.

“We’re really speaking to a need,” said Kevin Dedner, 45, founder of the mental health startup Hurdle. “Mission alone is not enough. You have to solve a problem.”

Dedner’s company, headquartered in Washington, D.C., pairs patients with therapists who “honor culture instead of ignoring it,” he said. He started the company three years ago, but more people turned to Hurdle after the killing of George Floyd.

In Memphis, Tennessee, Erica Plybeah, 33, is focused on providing transportation. Her company, MedHaul, works with providers and patients to secure low-cost rides to get people to and from their medical appointments. Caregivers, patients or providers fill out a form on MedHaul’s website, then Plybeah’s team helps them schedule a ride.

While MedHaul is for everyone, Plybeah knows people of color, anyone with a low income and residents of rural areas are more likely to face transportation hurdles. She founded the company in 2017 after years of watching her mother take care of her grandmother, who had lost two limbs to Type 2 diabetes. They lived in the Mississippi Delta, where transportation options were scarce.

“For years, my family struggled with our transportation because my mom was her primary transporter,” Plybeah said. “Trying to schedule all of her doctor’s appointments around her work schedule was just a nightmare.”

“I’m more than proud of her,” said Plybeah’s mother, Annie Steele. “Every step amazes me. What she is doing is going to help people for many years to come.”

Mission alone is not enough. You have to solve a problem.

Health in Her Hue launched in 2018 with just six doctors on the roster. Two years later, users can download the app at no cost and then scroll through roughly 1,000 providers.

“People are constantly talking about Black women’s poor health outcomes, and that’s where the conversation stops,” said Wisdom, who lives in New York City. “I didn’t see anyone building anything to empower us.”

As her business continues to grow, Wisdom draws inspiration from friends such as Nathan Pelzer, 37, another Black tech founder, who has launched a company in Chicago. Clinify Health works with community health centers and independent clinics in underserved communities. The company analyzes medical and social data to help doctors identify their most at-risk patients and those they haven’t seen in awhile. By focusing on getting those patients preventive care, the medical providers can help them improve their health and avoid trips to the emergency room.

“You can think of Clinify Health as a company that supports triage outside of the emergency room,” Pelzer said.

Pelzer said he started the company by printing out online slideshows he’d made and throwing them in the trunk of his car. “I was driving around the South Side of Chicago, knocking on doors, saying, ‘Hey, this is my idea,’” he said.

Wisdom got her app idea from being so stressed while working a job during grad school that she broke out in hives.

“It was really bad,” Wisdom recalled. “My hand would just swell up, and I couldn’t figure out what it was.”

The breakouts also baffled her allergist, a white woman, who told Wisdom to take two Allegra every day to manage the discomfort. “I remember thinking if she was a Black woman, I might have shared a bit more about what was going on in my life,” Wisdom said.

The moment inspired her to build an online community. Her idea started off small. She found health content in academic journals, searched for eye-catching photos that would complement the text and then posted the information on Instagram.

I didn’t see anyone building anything to empower us.

Things took off from there. This fall, Health in Her Hue launched “care squads” for users who want to discuss their health with doctors or with other women interested in the same topics.

“The last thing you want to do when you go into the doctor’s office is feel like you have to put on an armor and feel like you have to fight the person or, like, you know, be at odds with the person who’s supposed to be helping you on your health journey,” Wisdom said. “And that’s oftentimes the position that Black people, and largely also Black women, are having to deal with as they’re navigating health care. And it just should not be the case.”

As Black tech founders, Wisdom, Dedner, Pelzer and Plybeah look for ways to support one another by trading advice, chatting about funding and looking for ways to come together. Pelzer and Wisdom met a few years ago as participants in a competition sponsored by Johnson & Johnson. They reconnected at a different event for Black founders of technology companies and decided to help each other.

“We’re each other’s therapists,” Pelzer said. “It can get lonely out here as a Black founder.”

In the future, Plybeah wants to offer transportation services and additional assistance to people caring for aging family members. She also hopes to expand the service to include dropping off customers for grocery and pharmacy runs, workouts at gyms and other basic errands.

Pelzer wants Clinify Health to make tracking health care more fun — possibly with incentives to keep users engaged. He is developing plans and wants to tap into the same competitive energy that fitness companies do.

Wisdom wants to support physicians who seek to improve their relationships with patients of color. The company plans to build a library of resources that professionals could use as a guide.

“We’re not the first people to try to solve these problems,” Dedner said. Yet he and the other three feel the pressure to succeed for more than just themselves and those who came before them.

“I feel like, if I fail, that’s potentially going to shut the door for other Black women who are trying to build in this space,” Wisdom said. “But I try not to think about that too much.”

‘An Arm and a Leg’: How to Avoid the Worst Health Insurance