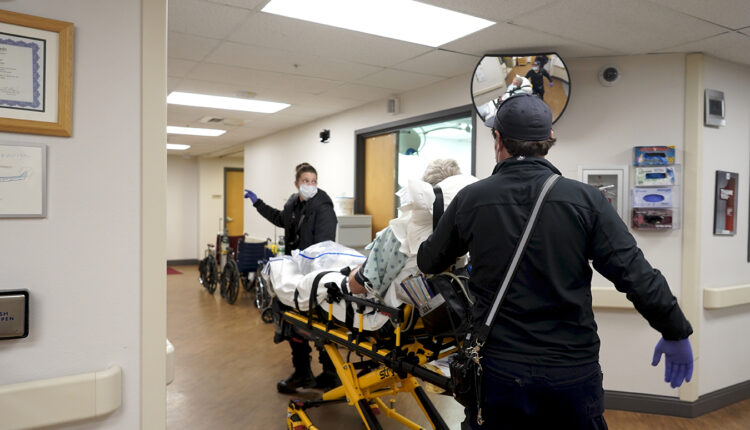 GUNNISON, Colo. — The night after Thanksgiving, a small ambulance service that covers a huge swath of southwestern Colorado got a call that a patient needed an emergency transfer from the hospital in Gunnison to a larger one with an intensive care unit 65 miles away in Montrose.

The patient — a 78-year-old man — was experiencing atrial fibrillation, an irregular heartbeat that usually isn’t life-threatening. But for patients like this one with chronic health conditions, a history of cardiac issues and high blood pressure, the condition can cause a stroke or heart failure.

Workers from Gunnison Valley Health Paramedics rolled the patient, who was on a gurney, out of the hospital and into the frigid night air. AnnieGrace Haddorff, the emergency medical technician on call, helped load the patient into the ambulance and jumped into the driver’s seat. Paramedic Alec Newby got into the back and hooked the patient up to a blood pressure cuff; a pulse oximeter, which measures heart rate and blood oxygen saturation; and an electrocardiogram, which records the heart’s electrical activity.

“Your heart is obviously pissed off,” Newby told the man as the ECG confirmed the atrial fibrillation.

The ambulance pulled onto U.S. Highway 50 for the one-hour-and-15-minute drive past clusters of homes among rolling hills of sagebrush, the expansive Blue Mesa Reservoir and the gaping Black Canyon of the Gunnison, with its craggy spires.

The patient was stable enough for the long drive, which covered only a sliver of GVH Paramedics’ 4,400-square-mile service area. It is more than twice the size of Delaware and is the largest response zone for an ambulance service in all of Colorado. A typical fire or emergency medical service response area ranges from 100 to 400 square miles.

Each time a patient must be transported to another medical facility, Gunnison Valley Health Paramedics is left with few vehicles to respond to emergencies in a coverage area more than twice the size of Delaware.(Helen Santoro for KHN)

In recent years, interfacility transports or transfers, also known as IFTs, like this one have become increasingly common for GVH Paramedics, forcing the team to drive far outside its already vast zone. Before the pandemic, the number of transfers rose because the population of Gunnison County was steadily increasing, more tourists were being drawn to places like the popular Crested Butte ski resort, and GVH Paramedics had expanded its services to larger metropolitan hospitals outside Gunnison County.

But now the team is being called to move patients more frequently, and greater distances, because the hospital beds in the relatively close cities of Montrose and Grand Junction are filled with covid-19 patients. The team is regularly required to drive patients to Denver, which is around three hours and 40 minutes from Gunnison.

Officials from the ambulance service worry that they might find themselves unable to respond to an emergency because their resources, which include six ambulances but only enough staff to operate three of those vehicles, are tied up on a long-haul transfer.

What were once 2½- or three-hour trips to Montrose are now far longer excursions, “and that takes resources from this community,” said CJ Malcolm, chief of emergency services. “We were doing that pre-covid, but now the state is so impacted, it’s like a daily part of our lives.”

Before the pandemic, all the ambulances would be simultaneously out on 911 calls or IFTs less than 10 times a year. Now, Malcolm said, it is happening with greater frequency. In those cases, GVH Paramedics leans on the emergency response team in Crested Butte, about 28 miles from Gunnison, or the response to the patient is delayed.

“Anytime we have one or two ambulances out on an IFT, this leaves a massive tract of land with only one ambulance to respond,” Malcolm said. “This is a moderately terrifying position to be put into when we can easily have two or three 911 calls in a row.”

In August, for example, Gunnison Valley Health hospital transferred more than 60 patients, 37 of whom were transported by GVH Paramedics. That means that at least once a day that month, a GVH Paramedics crew was taking a patient out of town, Malcolm said. And if crew members aren’t scheduled to be back in Gunnison by 1 a.m., they must spend the night in a hotel to avoid driving along treacherous mountain roads while overly tired.

GVH Paramedics’ service area covers almost all of Gunnison County, a large portion of Saguache County and sections of Montrose and Hinsdale counties. It contains mountain ranges, canyons and wide expanses of high desert. With around 6,600 full-time residents and a university, Gunnison is the largest town the team serves. The surrounding towns — including Tin Cup, Pitkin and Ohio City — are villages with a couple of hundred people or former mining towns where the artifacts from the boom times outnumber the residents. 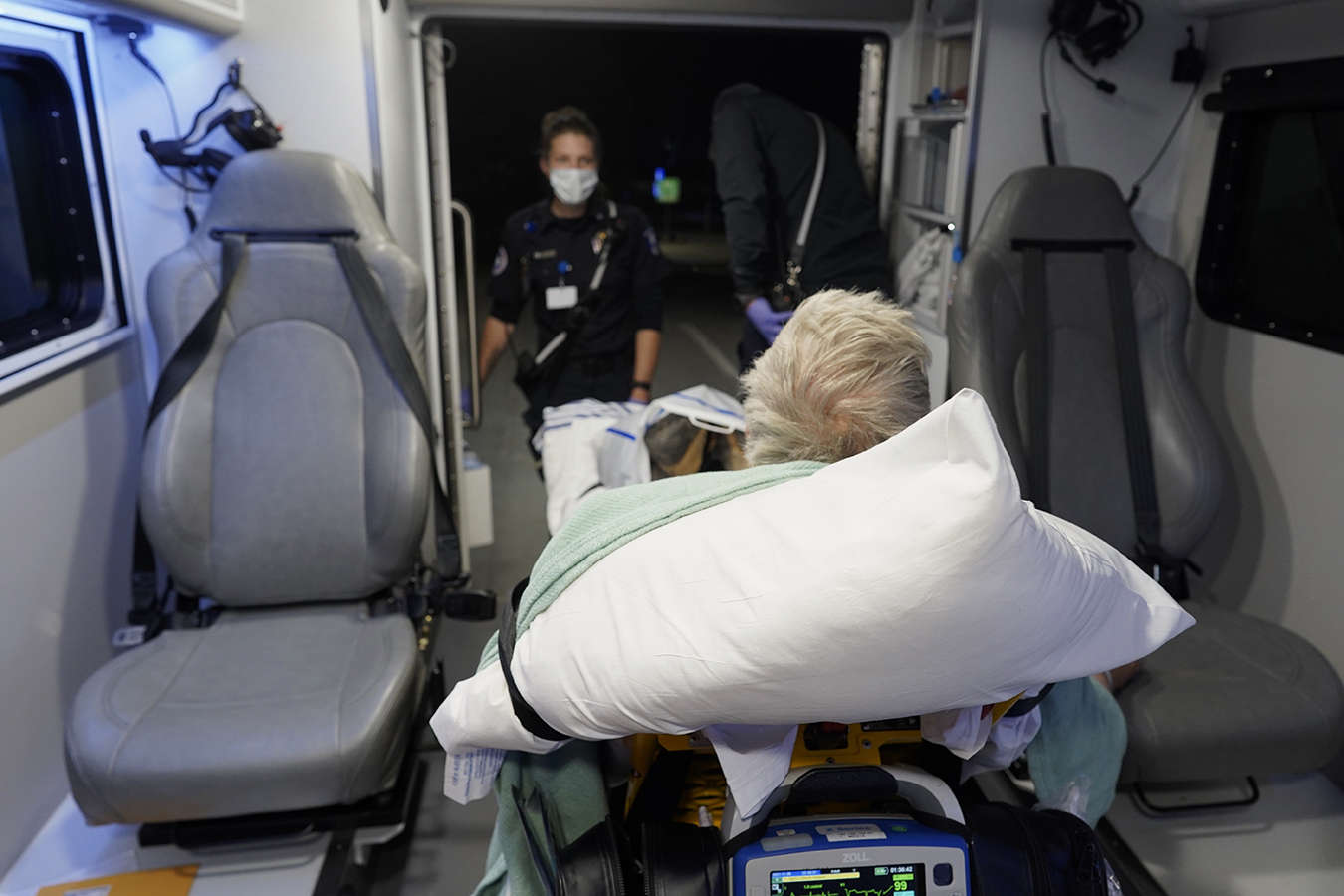 The Nov. 26 drive to Montrose took the Gunnison Valley Health Paramedics team an hour and 15 minutes. (Helen Santoro for KHN)

GVH Paramedics’ 21 full-time staff members and 10 to 20 individuals who work as needed have certifications in wildland firefighting and backcountry medicine skills, including swift-water, ice and avalanche rescue. To deal with the increased demands from IFTs, they have added an extra staff member to each shift, and off-duty staffers are being called in to assist.

As the pandemic drags on, the number of IFTs will probably continue to increase. By mid-November, the number of people in the hospital with covid-19 in Colorado was staggeringly high, approaching the December 2020 peak of 1,847. Hospitalizations remained above 1,500 through the end of the month. As a result, 93% of the state’s acute care hospital beds and 94% of ICU beds were being used as of Nov. 30, according to data from the Colorado Department of Public Health and Environment.

Adding to the strain are people seeking care they delayed because of the pandemic and other respiratory viruses, such as respiratory syncytial virus, circulating in the state, Welch said.

Kelly Thompson, chief of operations of CareFlight of the Rockies, an air ambulance service that operates in Colorado and other parts of the West, agreed with this assessment. “We’ve already been transporting large numbers of kids with RSV that are sick, and you have covid on top of all of this,” Thompson said. “It’s a big concern. This is the time when we have a lot of sick people.”

In early November, to manage escalating concerns about hospital capacity, Colorado hospitals and health systems activated tier 3 of the state’s patient transfer system — the highest level. That means covid and non-covid patients can be moved without their consent from a hospital that doesn’t have enough capacity to one with more space. Hospitals can also send sicker patients to medical centers with more specialized care.

As the GVH Paramedics crew members approached Montrose with their patient over the recent holiday weekend, Newby called the hospital to let the staff know they were arriving. They pulled up to the emergency room entrance, and Newby and Haddorff rolled the patient into a hospital room. The Montrose hospital staff took over, moving the patient from the gurney to a hospital bed as Newby updated them on the patient’s medical records.

Soon they were back in the ambulance, headed for home. “IFTs can be stressful,” said Haddorff as she maneuvered the twisty mountain road bathed in moonlight.